Janie's mom passed away on Friday. 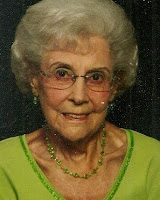 June Lea Boyls, born May 24, 1925, in Picher, OK, to Jesse and Louise Harris, passed away at age 84 on Friday, April 23, 2010. June’s family moved to Tulsa when she was 10. Her family’s house was located across the street from the home of her future husband, Ted. She graduated from Tulsa Central High School in 1943 and attended the University of Tulsa before marrying Ted Boyls, her beloved husband of 55 years, on August l5, 1946. June enjoyed a 40-year career with Southwestern Bell Telephone Co, where in the mid-1960’s she was named the first woman Manager in the State of Oklahoma. She retired there as a Manager in the Business Office in 1986. She was also an active member of the Woodland Acres Baptist Church. After retirement, June spent time traveling, making ceramics, gardening, reading, and doing the daily crossword puzzle. She made three trips to Europe, visiting over 20 countries, and by her 80th birthday had visited all 50 states of the U.S. June remained an avid OU football fan her entire life, faithfully ringing her OU cowbell after each OU score. June was preceded in death by: her parents; her husband, Ted; her oldest son, Ted W. Boyls, Jr.; and her granddaughter, Elizabeth “Beth” Boyls. June is survived by: her daughter, Janie Boyls Daigle; son, Steve Boyls, daughter-in-law Dr. Kathy Boyls; daughter-in-law Debbie Boyls; grandchildren, Tim Boyls, Kathy Henry and husband Abe Henry, Stephanie Boyls and Stacie Boyls; sister-in-law Helen Arnold; and brother-in-law Pat Boyls. Services will be conducted Wednesday, April 28, 2010, at 10:00 a.m., at Woodland Acres Baptist Church, 5511 S. Harvard, Tulsa, OK. Dr. David Rhoades will officiate, along with Pastor John Banner. Burial will be at Rose Hill Cemetery in Tulsa. Contributions may be made to the Baptist Student Union, 410 W. Boyd, Norman OK, or the “Cure Diabetes Now Fund” on-line at www.Faustman- Lab.org.
at 4/27/2010 05:17:00 AM