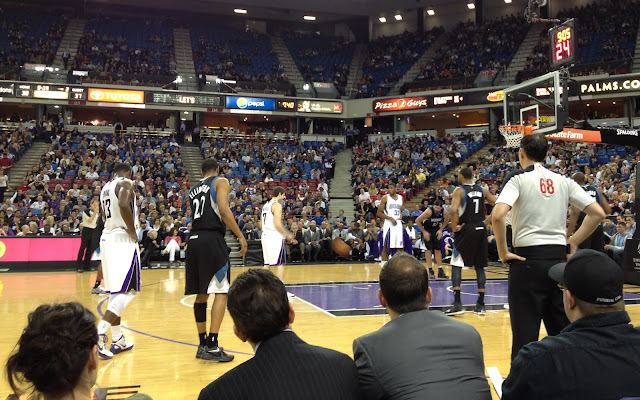 Sharon, Jack, Joe [a classmate of Jack] and I went to the Sacramento Kings versus Minnesota Timberwolves NBA basketball game. Sharon got four Kings Row 2 seats in section 112 from work. Leading most of the game, the Kings won by the score of 116 to 108.

Tyreke Evans was leading the scorer for Kings. He has 24 points on 8 for 14 from the two point range and 8 for 11 from the free throw line. For most of the game, Evans was playing small forward. With Thornton turning his ankle early in the game, Evans was on the floor with Isaiah Thomas at the point guard and Jimmer Fredette at the shooting guard for several long stretches of the game.

I have been very critical of Jimmer in the past. Against the Timberwolves, he scored 19 points in 25 minutes on 7 for 15 from the field, 3 for 7 from three and 2 for 2 from the free throw line. Being guarded by Luke Ridnour, he looked more effective than he did against Chris Paul and Mo Williams.

I was not as impressed with Kevin Love as I expected to be. He was the wolves leading scorer with 23 points on 8 for 17 from the field, 3 for 5 from three and 4 for 6 from the free throw line. Love added 7 rebounds. The Kings did a very effective job of pushing him around.

It was interesting sitting so close. While it is hard to get a feel for the flow of the game, it is great to be able to see their faces, hear them and watch the players beat on each other. Hunter and Snipes were in their seats. We waved at each other, but did not connect at half-time.