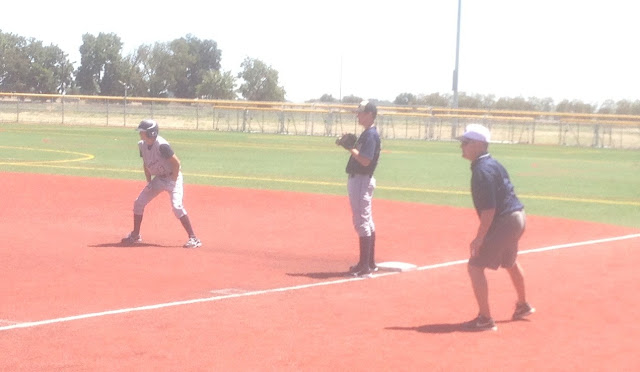 The Walbeck Elite played in the Super Series Battle of the Bats at the Woodland Sports Complex. This was a 16u wood bat tournament that included a bunch of teams that Jack has never faced before. The Elite were missing a number of their key players, including Matt F., Alex I., Aaron and Marco. They played the Nevada Union Jr Miners in the first game of the tournament.

Leading off, Jack had 2 walks, 4 stolen bases and 2 runs scored. In his first at-bat, he walked on four pitches. Jack stole second, stole third and scored on an error on Kyle's ground base to the right side. Jack walked on four pitches in his second plate appearance. He stole second, stole third and scored on Nick's inside the park home run to right field.

Jack played left field for two innings of a four inning game. He had one put-out on a line drive.

The Elite jumped all over the Miners and won the game by the score of 11 to 0 in four innings.

The Elite turned right around and played the East Bay Mustangs. This appears to be a team from Concord.

At the plate, Jack was 1 for 2 with a walk and a run scored. In his first at-bat, Jack lined a 1 and 1 pitch into right field for a single. He went to third on Nick's single, but ended the inning there with Kyle grounded out and Zach struck out. Jack hit a 1 and 1 pitch down the right field line in his second plate appearance. I was sure that it was going to be a double or a triple, but the right fielder made a great running catch for the out. In his third at-bat, Jack walked on 6 pitches. He went to second on a passed ball and scored on an infield error on Alex D's grounder.

Jack played five innings in left field. He did not have a put-out or an assist.

The Elite gave the game away early. Committing 8 errors, they lost the game to the Mustangs by the score of 11 to 4.

With a record of 1 win and 1 loss in the pool play, the Elite ended up seeded fourth out of nine teams. They will play the East Bay Prospects in the first elimination game on Sunday.
Posted by Heringer at 8/03/2013 11:59:00 PM