ESPN Films 30 for 30 Vol II: The Day The Series Stopped 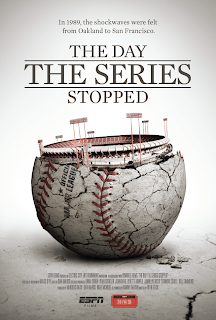 Sharon and I watched The Day The Series Stopped. This is the twenty-first installment of ESPN's 30 for 30 volume II. An episode guide for Vol II is here. This film looks at the events surrounding Game 3 of the 1989 World Series between the San Francisco Giants and the Oakland Athletics. Just as the game was getting ready to start, the 6.9 Loma Prieta earthquake rolled through the Bay Area.

Living in Northern California and being a Giants fan, I am pretty familiar with the events surrounding the earthquake. Living in Shingle Springs, I was actually out for a run when the earthquake occurred. I got back from my run and turned on the game…

I was struck by two very different things in the film. First, the footage of the collapsed Oakland freeway is horrific. The film includes a lot of stills and video of the area and the rescue attempts.

Second, when the history of Candlestick Park was being reviewed, they showed some video footage of the baseball park from the early 1960's. I was astonished at how different the park looked. Built as a baseball park, you could actually see the bay beyond the centerfield fences.

This is a solid documentary. There are a couple of good human interest stories sprinkled into the review of the events. It did seem like they used some of the same shots over and over as they introduced different segments; it was a little repetitive.
By Heringer at 10/24/2014 11:59:00 PM