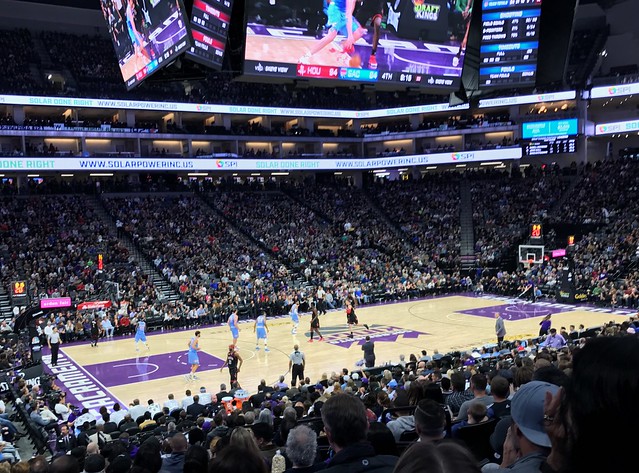 Sharon and I went to the Sacramento Kings versus Houston Rockets NBA basketball game. Hitting an impressive number of 3 point shots, Houston led by as much as 29 in the first half. The Rockets cooled off a little in the second half and the Kings were able to claw back. The Rockets won the game by the score of 117 to 104.

The Houston Rockets set an NBA record with 50 3-point attempts!?1

Playing only 30 minutes due to second half foul trouble, DeMarcus Cousins led the Kings with 32 points on 12 for 22 from the field, 5 for 9 from three point range and 3 for 5 from the free throw line. He also had 9 rebounds. Cousins made four consecutive 3-pointers late in the fourth quarter when the Kings pulled within 112-104.

In 40 minutes, James Harden led the Rockets with 23 points on 6 for 18 from the field, 3 for 11 from three point range and 8 for 8 from the three point line. He had a triple double with 10 rebounds and 10 assists. I spent most of the second half watching his line and rooting for him to get the triple double. Harden got a rebound on the last play of the game to notch the triple double.

We ran into Alan and David Laskin before the game. Sharon and I visited with Holly and Van during half-time.

Although she saw Paul McCartney in the new arena in October, this was Sharon's first Kings game in the Golden 1 Center. I parked in the Capitol Garage at 10th and K. We sat in Section 109, Row H, Seats 5 and 6. I bought these tickets for about half price using a promotion that the Kings sent out to my old seasons ticket account.