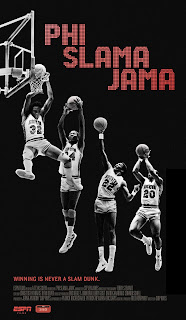 Running on the treadmill over Thanksgiving holiday, I watched Phi Slama Jama. Led by a Nigerian soccer player named Hakeem Olajuwon and a lightly recruited hometown kid named Clyde Drexler, the University of Houston Cougars, nicknamed Phi Slama Jama, electrified the NCAA Final Four with three straight appearances from 1982 to 1984. This is the twelfth installment of ESPN's 30 for 30 Volume 3. An episode guide for Vol 3 is here.

As underclassmen in 1981/82, a young Cougar team lost to the eventual champion North Carolina Tar Heels in the national semifinals by the score of 68 to 63. The North Carolina team included Micheal Jordan, James Worthy and Sam Perkins.

The 1982/83 season marked the high point of Phi Slama Jama. The Cougars posted an Associated Press #1 ranking, a 31–2 record and a 26-game winning streak before losing in the NCAA Final. Considered one of the most unlikely upsets in NCAA tournament history, Phi Slama Jama lost a closely contested championship game against the North Carolina State Wolfpack by a score of 54–52. Ironically, the final margin was decided on a last-second dunk by Wolfpack forward Lorenzo Charles. The story of the Wolfpack's Cinderella championship run is told in the 30 for 30 Volume 2 film Survive and Advance.

Despite the early departure of star forward Clyde Drexler after the 82–83 season, Phi Slama Jama continued their success in 1984. Hakeem Olajuwon became the focal point of the team and was selected as a consensus first team All-American. The Cougars returned to the Final Four once more, this time losing to the Patrick Ewing-led Georgetown Hoyas in the final. Olajuwon, with one year of eligibility remaining, declared for the NBA draft shortly after the loss in the title game.

Woven through the film is the story of enigmatic role player Benny Anders. The documentary follows 1981/82 co-captains Eric Davis and Lynden Rose as they try to find Anders after more than two decades of mystery.

Although not as compelling as some of the other 30 for 30s, this is a solid documentary. Somewhat ironically, Olajuwon and Drexler won two NBA Championships with the Houston Rockets.
By Heringer at 11/30/2016 05:00:00 AM