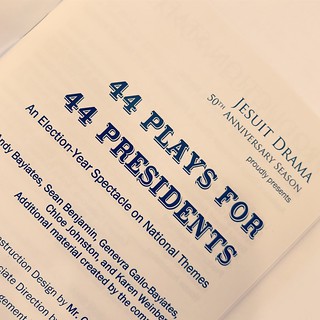 Sharon and I went to the Jesuit Drama production of 44 Plays for 44 President. The production included a couple of minute scene on each of the 44 presidents. While I liked it overall, I didn't feel like that they did justice to Grant, Johnson or Bush Sr. For some of the president's they did a really nice job of providing a concise summary of their administration. For others, it was mostly silly.

I have been working on a long term project to read a biography of all of the presidents. The production remind me that I have a big gap between Harrison and Lincoln. There are six president in this twenty year period that I haven't read anything about. None of these presidents served more than a single term.