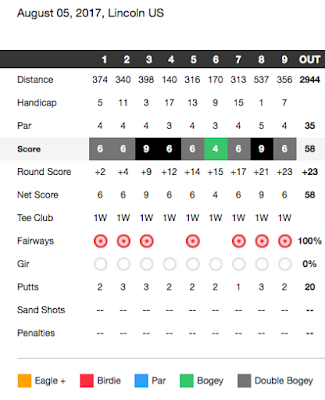 Saturday afternoon, Sharon and I met the Sanborns and the Gainsleys at the Catta Verdera Country Club. The Sanborns are members. The plan for the afternoon was to play nine holes of golf.

We started off as two threesomes. Marlene, Sharon and I were in one group, while Phil, Kevin and Donna were in another. With the course fairly empty, this collapsed down into one big group about the fifth hole.

I shot a liberally scored winter rules 58. I had a number of solid shoots, but really fell apart on the third and eighth holes.

After the golf, we headed to the Sanborns. They bought a house above the twelfth hole in early July. The house has some great views of the surrounding country club and down into the valley. We swam in their pool and had a late dinner off filet minion.

We finished the day playing Mexican Train until almost midnight. Sharon had played the game when she was out with Janie last weekend and then ordered a set from Amazon.

The Sanborns new house includes a Casita over the garage. Sharon and I crashed there, while the Gainsleys stayed in the guest bedroom.
By Heringer at 8/05/2017 11:59:00 PM