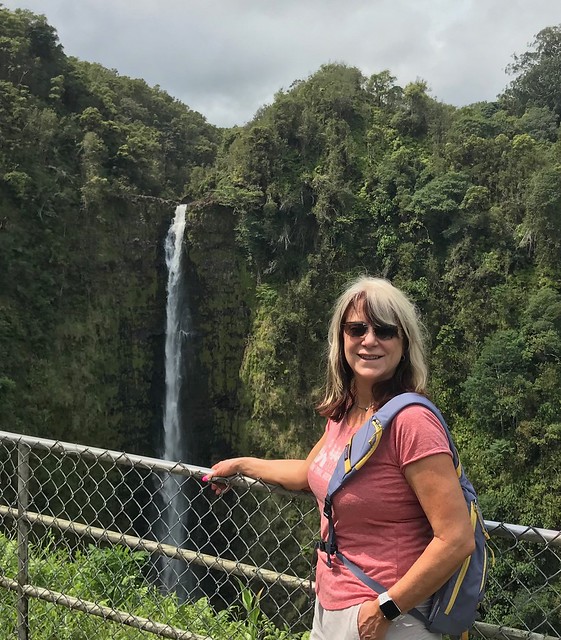 Sleeping later, we had breakfast in the condo and made some sandwiches for lunch. The plan for the day was to explore the Hamakua Coast. Hamakua was a large problem loan when I was with Farm Credit in the 80s and 90s. Every time, I hear the word it invokes a number of memories from working at the banks.

Our first stop was the Kapola State Recreation Area State. Although there were some longer hikes in the park, we hiked the 0.7 mile nature trail. This stop didn't meet my expectations... I don't recommend it.

From there, we went to Akaka Falls State Park. We walked the 0.7 mile trail through the park. There was a great view of the falls. It was definitely worth the trip. We ended up having lunch at picnic table in the parking lot.

Leaving the falls, Sharon made a quick stop to get a coconut to drink. She and Jack had one when we drove to the hotel on Kaui. She wanted to get one and send a picture to Jack.

The next stop was the Hawaii Tropical Botanical Garden. We toured the garden down to Onomea Bay. As we got to the ocean, it started to rain. Running back to the car, it rained harder and harder. We ended up spending over an hour in the Garden.

With the rain getting heavier, we headed into Hilo for some gas. We made a decision to go back to the other side of the island via the Saddle Road. In one of those interesting coincidences, as Waze was leading us across Hilo to the road, we passed the Hawaii Farm Credit Office in Hilo. Sharon has done business with the staff for almost 30 years. We stopped and she spent some time visiting with Linus. Although it was probably more Sharon's idea, I really enjoyed the drive back via the Saddle Road between the two volcano peaks.

Back on the Koholo Coast, we had a drink at happy hour in the Tommy Bahama restaurant near the Mauna Lani Resort. We watched Lindsey Vonn get the bronze medal in the Olympic Downhill.

We finished the day with dinner at the Canoehouse. The restaurant was right on the beach and we had a gorgeous view of the sunset. We split appetizers of Hilo sweet corn bisque [with homestyle bacon, garlic cruotons, espallete pepper] and roast beets [hawaiian salt & garden herb roasted beet, fresh picked peashoots 18 big Island chevre, li hing mum dressing]. For our entrees, Sharon had seared furikake crusted ono [served rare, local fern shoot salad, enhanced with pickled ginger dressing 21/40 tamari shallot and peppercorn reduction, ogo and tobiko] and I had a special with snapper and pasta. Although not as good as the food at Merriman's, the meal was good. The view was spectacular!