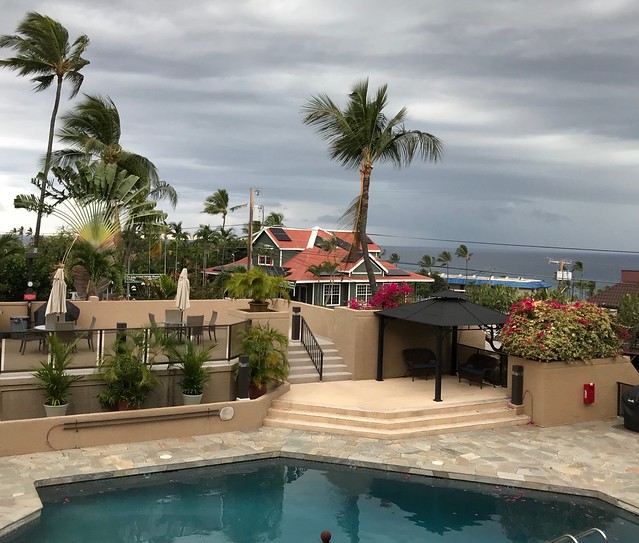 Up at 3:00 am, we took off to the airport a little before 4:00 am. Last summer, I made a decision to upgrade the outbound leg of this trip to first class. We caught a 5:40 am flight from Sacramento to San Francisco.

We were on the ground in San Francisco in less than an hour. Unfortunately, we had a four hour plus layover! Sharon got a couple of United Club passes. We had a light breakfast and hung out for a while in United Club. With four hours to kill, we wandered from Terminal 3 into the International Terminal and back. We settled in a different United Club until it was time to board.

We took a 11:15 am flight from San Francisco to Kona. Although we were twelfth in line for take-off, we landed roughly on time about 3:00 pm. It is roughly a five and a half hour flight. Standing at baggage claim, I glanced over and I saw our bags off to the side. Apparently our bags had come on an earlier flight. In an odd twist, both Sharon and I ended up getting a text message during dinner (three hours later) from United telling us that our bags had arrived on an earlier flight.

We caught a shuttle to the rental car. After some discussion, we ended up swapping the convertible for a small SUV. It is a Nissan Rogue like we had on the Fall trip.

On the way into town, we stopped at Safeway and bought a few staples. We are spending eight nights at the Kona Pacific Condos. The Wallens own a condo across the hall. They won't be here until late Wednesday night.

When we got to the condo, it was still being cleaned. We relaxed on the deck. As they finished up cleaning the condo, the weather moved in. It was pouring rain with thunder and lightning. I