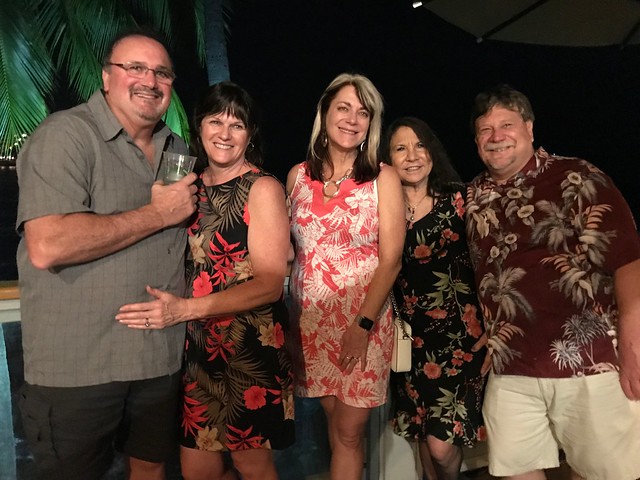 I got up and went for a run. I ended up running to the old airport north of town. When I stopped to stretch, I noticed a runner heading down the beach back towards town and decided to follow her. This turned into a little bit of an adventure. I ran into a dead end and had to back track through a private gated community. I only got back out to the street when an older couple opened the gate.

Getting cleaned up, Sharon and I headed to breakfast. A huge table of Wallens plus a separate table for the Tomasins and Geselbrachts were having brunch at Bongo Ben's Island Cafe. The Hunter group was waiting for a table. Continuing down the street, we ran into the Chabriers.

Sharon and I ended up walking to the Fish Hopper. We both had the FRESH HAWAIIAN CATCH BENEDICTS [Fresh Catch-Ono, English Muffin Topped with Poached Eggs ffinished with Hollandaise Sauce & Spanish Paprika].

After brunch, we explored Kona. This was the only time in the week that we spent at the condo that we explored the area. The guidebook said that you needed half a day; this is probably about right.

We visited four sites, including:
Wandering back to the condo, we ran into Bobby and Yuli. The Hunter group [Bobby, Yuli, Robbie, Danny and Sammy] is staying at the same condos.

After a nap, we headed to Huggos on the Rocks. In spite of the crowd, the Wallens worked to organize a lot of the wedding party at tables. We eventually ended up at a nice table with the Tomasins and Geselbrachts. Chabrier got frustrated with the dance to get tables and chairs and took off. LT Smooth (the same band that played the wedding) was playing.

We eventually had a late dinner with the Tomasins and Geselbrachts at Huggos next door. I had the Island Fresh Catch [Monchong] with Kabocha Pumpkin Risotto. Sharon had a lobster flatbread.