Sharon was up early and got us going. This was probably a good thing. The plan for the day was to tour Hawaiian Volcanoes National Park. This was about a two hour and fifteen drive from the condos.

After breakfast at the condo and a quick stop at Longs, we were on the road by 7:45 am. Changing drivers at the halfway point, we were in the park by 9:30 am.

After stopping at the visitor's center, we decided to hike the Kilauea Iki Trail; one of our guidebooks described it as the one trail that you should hike in Hawaii. Looping through the rainforest and down into the crater, it was spectacular. Coming up out of the crater, we walked through the Thurston Lava Tube. 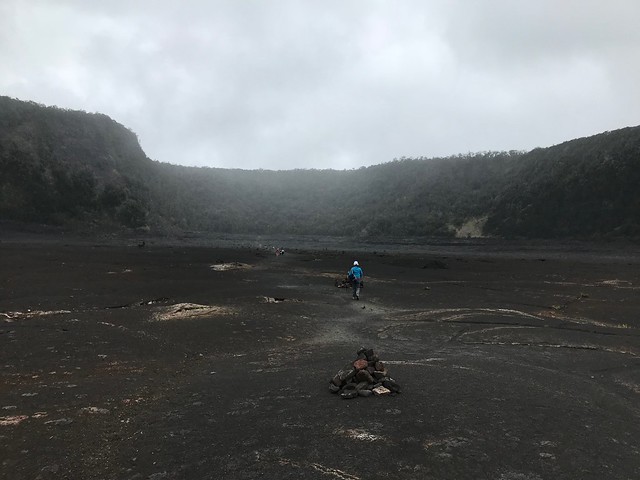 A map of the hike is here.

After the hike, we went into Volcano and had lunch at the Kilauea Lodge and Restaurant. Sharon had a Salad Nicoise [Seared Catch-of-the-Day, Island greens, sliced boiled eggs, green beans, fingerling potatoes, tomatoes, Kalamata olives, and anchovies] and I had Lodge Club Triple decker [toasted sandwich with turkey, bacon, lettuce, tomato, avocado and mayonnaise].

Heading back into the park, we stopped at the steam vents. From there we continued to the Jagger Museum. In a surprise, we could actually see lava fountains from the museum outlook.

Our final stop in the park was the Volcano House. We stopped and had a drink before heading back to the condo. It has a great view of the crater.

We need to come back and do two things. First, the view of the crater is supposed to be spectacular at night. Second, it is a long hike (12 miles?), but it would be interesting to see flowing lava.

Although we keep talking about exploring the area around the condo, we crashed. The Wallens rolled up at the end of the day. He said that he knocked on the door, but I never heard him. Their condo is two doors down from the one that we are renting. The rest of the Davis Mafia is rolling into town over the next two days.
By Heringer at 2/21/2018 08:48:00 AM