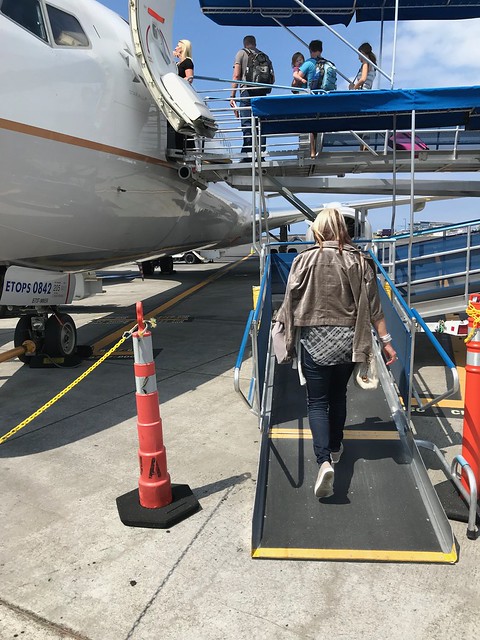 It was a fairly lazy morning. After a couple of late nights, we slept in, started to pack up and cleaned up the condo. We spent a little time visiting with John and Jill.

We picked up the Geselbrachts about 11:45 am at the Royal Kona. They are flying to Maui to meet the Tomasins. The Geselbrachts, Tomasins and Hunters are all on Maui until next weekend.

At 1:30 pm, Sharon and I boarded a 2:15 pm United flight to San Francisco. I had upgraded us to the exit row on Sunday. Although obviously not as nice as the first class seats on the way out, it was very comfortable. We were on the ground in San Francisco about 9:15 pm.

We had a snack and a drink at the Union Street Gastropub near the gate. We boarded the United Flight to Sacramento about 10:30 pm. The plane was an Airbus A319. It was probably the most uncomfortable seat I have had in years...

It was a very odd mixture of passengers. It seems like there were a lot of people off international flights coming through customs and continuing to Sacramento.

Unfortunately, there were no pilots. Although the departure was supposed to be 11 pm, it don't think that we pulled away from the gate until after 11:30 pm. We were on the ground in Sacramento about 12:15 am on Tuesday. By the time we got home, it was about 1:15 am.

It was a great time. There are definitely a couple of things on my bucket list that I want to go back and do on the big island, including hiking to see the lava flowing across the ground and seeing the Kilauea Crater at night. Although Sharon and I have lots to places we want to see in the world, given that the Wallens own a condo on the island, I think that it is more likely than not that we will be back!
By Heringer at 2/26/2018 11:59:00 PM