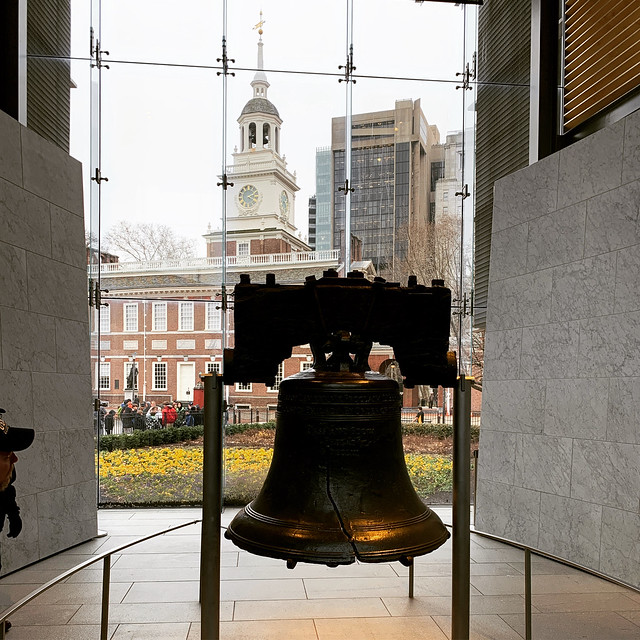 I am rooming with Tomasin on this trip. After a late night, he and I slept until after 9 am. Unfortunately, the concierge lounge only serves breakfast on weekdays until 9 am.

One of the problems with a group this size (more than 10) is that it can be hard to get everyone moving in the same direction. We finally got everyone headed out on a search for rain pants. Afterwards, we had lunch at the Field House.

From there, we headed back towards Independence Hall. We walked through the building housing the Liberty Bell.

Next, we headed to Christ Church. Wallen wanted to find Benjamin Rush's grave. In the weeks before the trip, I was casting around for something to read and Wallen recommended Rush's biography. The Christ Church graveyard ended up being a couple of blocks from the church. We wandered the graveyard.

Sharon, Jack and I spent two days touring Philadelphia in 2009 [day 1, day 2].  We hit most of the same spots.  We were also there in 2015 picking Jack up from the month he spent at UPenn.

The next stop was the Museum of the American Revolution. We spent a couple of hours touring the museum. Laid out chronologically, the museum has a lot of information to absorb.

Back at the hotel, we settled into a spot in the lobby before getting Ubers to dinner. We had dinner at the Butcher Bar. Max's daughter Tracy had ordered THE TROUGH [ROTISSERIE GAME HEN, ASSORTED HOUSE-MADE SAUSAGES, CHEF'S CHOICE CUT OF MEAT, WILD BOAR RIBS, ROYAL WITH CHEESE, HOUSE-SMOKED BACON, KOREAN SHORT RIBS, HOUSE-CUT FRIES, GRILLED PITA]. It was more food than twenty of us could have eaten. It was more a novelty than a meal. It wasn't bad, but the cuts of meat were not that good. I finished the dinner moving to the end of the table and catching up with Nooter.

It was pouring rain when we walked out of the restaurant. After some confusion ordering the Ubers, we headed back to hotel and settled into what Nooter termed "our happy place" in the hotel lobby. It was after midnight before I headed to the room. 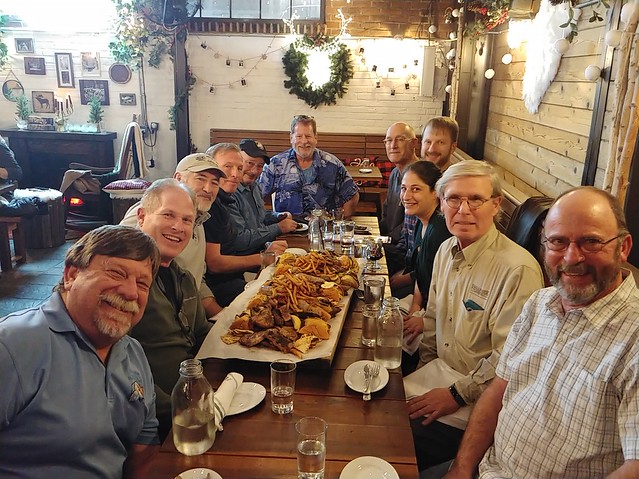