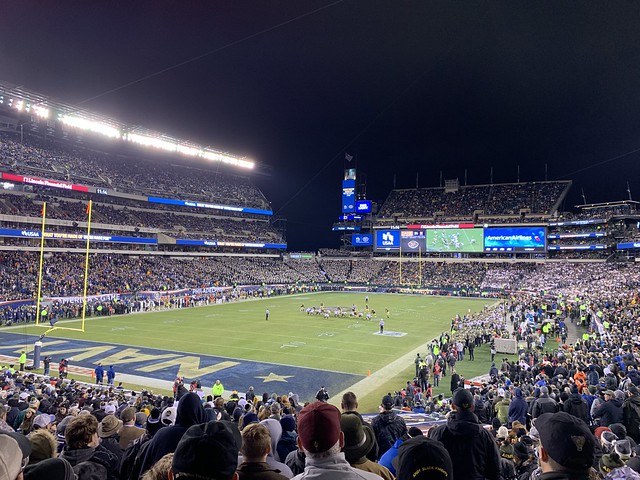 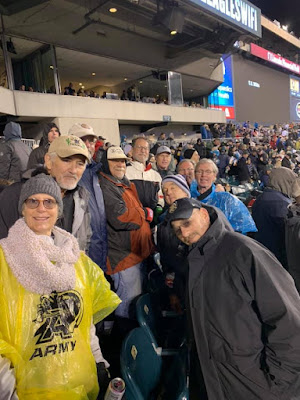 Up a little earlier than Friday morning, Tomasin and I wandered down to the concierge lounge and had breakfast. We had to switch hotels on Saturday; I am still not really sure why. We packed up the room and loaded all of the luggage in Max's car.

From there, we took an Uber to XFINITY Live! Located near the stadium, the venue contains over a dozen dining and entertainment options, including a theater, beer hall and artificial turf field.

ESPN College Gameday was broadcasting from a spot between XFINITY Live and the stadium. It was a zoo.

We wandered into the stadium about 1:30 pm for the 3 pm game.  Due to long lines, Nooter and Wallen didn't get into the game in 2018 until midway through the second quarter. This year, we ended up breezing right in. I was surprised at the number of security people wearing Secret Service vests.

Although Army scored first on a long drive, Navy won the game by the score of 31 to 7. There were only seven pass attempts in the game. Navy's only pass was by a wide receiver on a trick play!?!

It was a very unique event with lots of ceremony. The cadets from both service academies in their full dress uniforms were wandering everywhere. The energy from the cadets and the fans reminded me more of a European soccer game than an American sporting event. There was a lot of passion.

President Trump attended the game. In the first half, he was sitting in a booth about 20 yards to our left.

After the game, the group debated heading back downtown or out to the new hotel. We ended up grabbing an Uber to the Courtyard Marriott near the airport. This turned out to be a tactical mistake. There was literally only one restaurant surrounded by five or six hotels. After walking to the restaurant and back, we ended up having a late dinner in the Bistro in the lobby. After a couple of late nights, we crashed fairly early...
By Heringer at 12/14/2019 11:59:00 PM