Sleeping fairly late, Sharon and I wandered down the street from the hotel and grabbed some oatmeal for breakfast. Drew, Jack and Shannon picked up us at the hotel after 9:30 am and we headed to Universal Studios.

When we saw Drew and Shannon in October, I started proposing the idea of Sharon, Jack and I coming down to Southern California after Christmas and spending a day at Universal Studios. While Sharon, Jack and I had dinner in the City Walk years ago, I had never been to the park. 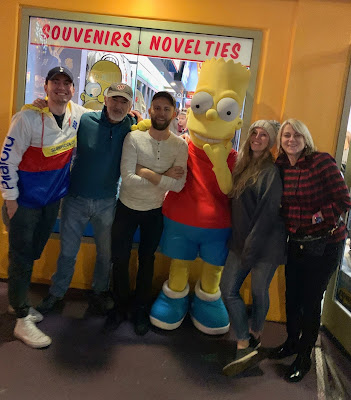 We were in the park and moving a little before 10:30 am. The day included:

Drew ran into an old neighbor playing a New York City cop character. He gave Drew two passes that were a game changer in terms of how much ground we could cover.

The day was pretty cold for Southern California. By 9 pm, we were done (the park closes at 10 pm). We walked back to the car. Drew dropped Sharon and I at the hotel.