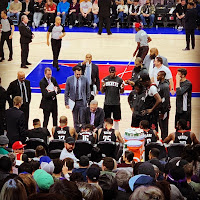 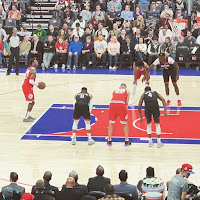 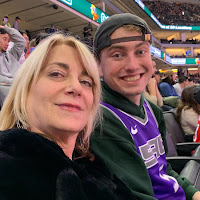 Monday night, Sharon, Jack and I went to the Sacramento Kings versus Houston Rockets NBA game. We had drinks and some heavy hors d'oeuvres at Tiger on K Street before the game.

Trailing by as many as 25 points in the second half, the Kings pulled within five points late in the fourth quarter. They ended up losing to the Rockets by the score of 113 to 104.

James Harden was the high scorer for the Rockets. He had 34 points on 10 for 19 from the field, 4 for 11 from three and 10 for 12 from the free throw line. Russel Westbrook added 28 points, including going 3 for 4 from three point range.

De'Aaron Fox was the high scorer for the Kings. He had 31 points on 13 for 31 from the field, 1 for 4 from three and 4 for 9 from the free throw line. In the fourth quarter, Fox missed five free throws that could have made it a much different game.

I was not impressed with the Kings' offense. They didn't seem to be on the same page. Given how much time Fox and Bagley have missed this year, this probably shouldn't be unexpected. Buddy Hield is in a huge slump; he was 3 for 12 from the field and 1 for 8 from three. Hield essentially didn't play in the fourth quarter.

I was also very disappointed in the refereeing. It seemed like Harden and Westbrook were getting all of the calls, while the Kings weren't getting any...