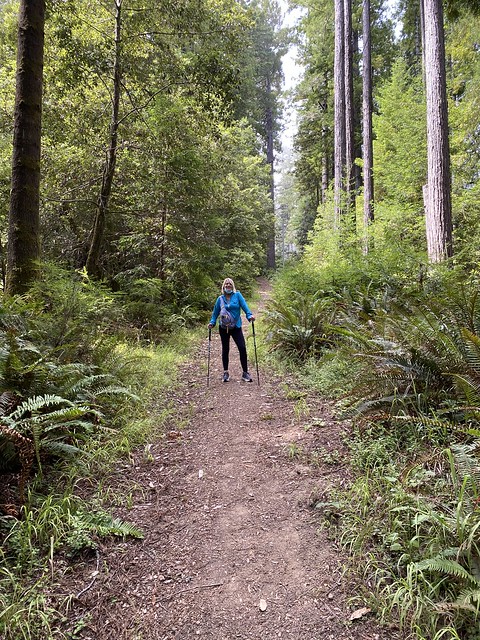 I started the day with a five mile run north from the house.  As I have often said, Sea Ranch is probably my favorite place in the world to run.  I came upon one historical marker that I hadn't seen before...  I was surprised how few people there were on the trail.

The plan for the day was a hike to the Gualala River.  It took a while to get everyone moving; with the larger group, I expect this is going to be a challenge all week.

With Shannon deciding to hang back, Drew, Jack, Sharon and I hiked from Pacific Ocean to the Gualala River.  We stopped for lunch near the river and then explored the San Andreas Fault Interpretive Trail.  We ended up hiking about 5.7 miles through a variety of terrain.  A map is here.

When we got back to the house, the Tomasins were there.  Tomasin had called me earlier in the day and asked about stopping by.  We had a nice socially distanced visit and a couple of beers.  Tomasin is closing down this medical practice and retiring at the end of August!

While the Tomasins were still here, Morgan and Lee showed up.  I am looking forward to spending a some time with the two of them.

Sharon, Jack and Drew made a run into town to get the ingredients for dinner.  Jack made vegetable quesadillas.