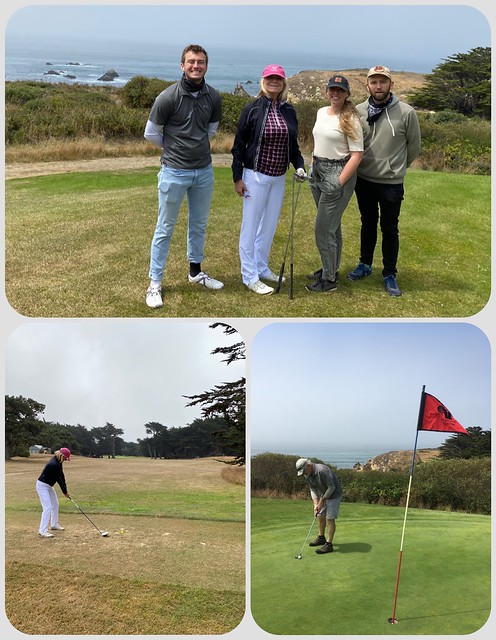 The plan for the day was golf.  Originally, we were going to play 18 holes on Monday and then play 9 holes on Thursday.  With Morgan showing up on Sunday, we decided just to play 9 holes.

The course was in horrible shape.  The fairways were dead and hard as a tabletop.  I struggled and took a number of mulligans.  I had a lot of trouble reading the greens.

We caught up with the kids at the 8th tee and played with them on the last two holes.  I hit a beautiful eight iron over the gulley to the back of the 8th green, but three putted...

I ended up shooting a very liberally scored 54.  We will probably play again on Thursday.

Afterwards, we headed into Gualala and got takeout from Trinks.  We took the food back to the house and had a late lunch on the back deck.

Everyone spent some time in the jacuzzi in the afternoon.  There are a number of odd things about how this house is situated on the bluff, including where they put the jacuzzi.  More on the house in a future post.

Working with Nooter, I scheduled a 6 pm Zoom cocktail hour with the Davis Mafia.  The group included Nooter and Barb, Chabrier and Karen, Tomasin and Julie and Wallen and Jill.  Drew, Jack, Sharon, Morgan and Lee made guest appearances on my end. 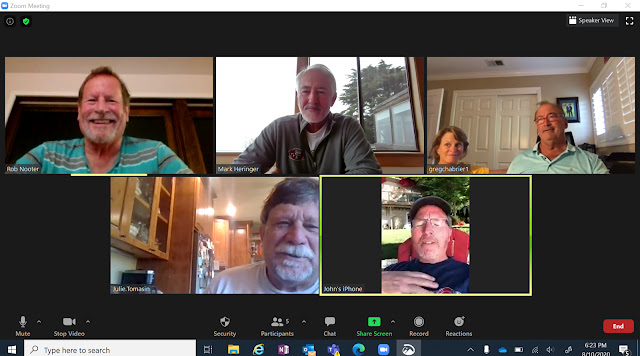 We had a late dinner.  Shannon and Drew made a great pork shoulder Mexican meal.

With the kids playing guitars in the living room, I crashed hard a little after 11 pm.