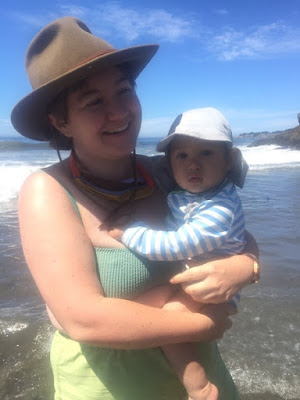 I ran north from the house. I covered four miles in 45:42 for an average pace of 11:20.
When I got back, Drew and Shannon had finished preparing a large English breakfast.  It included sausage, bacon, beans, toast, mushrooms and kale.
Morgan wanted to go to the beach again.  We packed everyone up and drove to the parking lot for the Walk On Beach.  Unlike Thursday, we actually made it to the Walk On Beach this time.
Just as we were setting up, a bee (meat bee?) landed on Lee's hand.  Morgan yelled and I grabbed the bee off of his hand.  Lee ended up getting stung (bitten?).  His finger swelled up a little bit, but he seemed very nonplussed about it.
When we got back to the cars, Sharon and I headed into Gualala to see if we could find any baby benadryl for Lee.  Stopping at both the Gualala and Surf market, we weren't able to find anything.  We decided to pick up everything for dinner.
After a late lunch, Sharon and I headed to the Gualala River to go kayaking.  We put the double in the water and headed towards the ocean rather than upsteam.  We covered 2.2 miles in just over an hour.  We had a really nice close encounter with a large group of pelicans along the way.
Everyone jumped in the hot tub when Sharon and I got back to the house.  Shannon spotted a small whale very close to the bluffs.  I was very surprised how close it was.
I barbecued hamburgers for dinner.  We added some macaroni and green salad.
We lost power for about an hour and a half just as I started to cook dinner.
We finished the night playing Unstable Unicorns and Catan.  Andrew won the game of Unstable Unicorns, while Jack won Catan.  It was almost midnight by the time I went to bed. 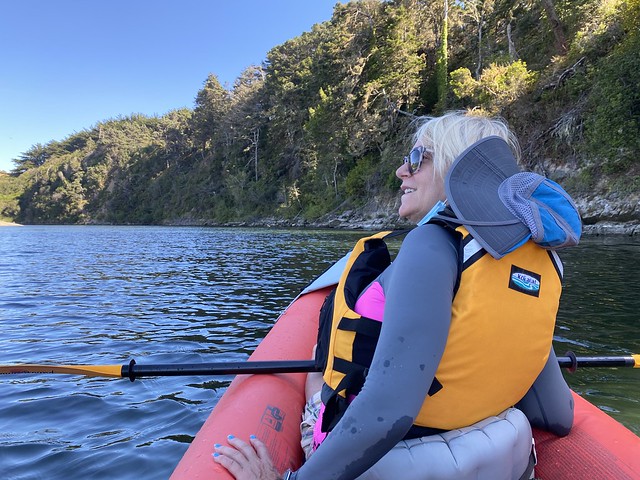