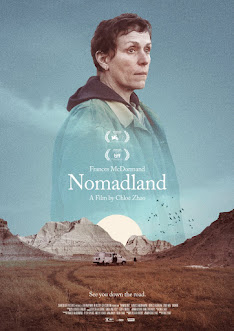 Friday night, Sharon and I watched Nomandland on the AppleTV on Hulu. We are continuing to make guesses about what movies might be nominated for Oscars. This film is on a number of lists as a candidate in the best picture and leading actress categories. Several sites have it as the favorite for best picture.

Nomadland is a drama directed, written, and edited by Chloé Zhao. It is based on the 2017 non-fiction book Nomadland: Surviving America in the Twenty-First Century by Jessica Bruder.

The film was named one of the ten best films of 2020 by the National Board of Review and the American Film Institute. It received four Golden Globe nominations, including Best Motion Picture – Drama at the 78th Golden Globe Awards.

It stars Frances McDormand as a woman in her sixties who, after losing everything in the Great Recession, embarks on a journey through the American West, living as a van-dwelling modern-day nomad. It also features David Strathairn in a supporting role, as well as real-life nomads Linda May, Swankie, and Bob Wells as fictionalized versions of themselves.

About halfway through the movie, Sharon said "if this wins Best Picture, I am going to kill myself." I liked the picture a lot more than she did. I enjoyed the scenery; we need to visit the Badlands. Visually, it would have been a nice movie to see in the theater. I think that it could win best picture. Whenever Sharon and I debate the possibility of a film winning best picture, I always point back to examples of Moonlight and The Shape of Water as films that I didn't particularly like, but won the Oscar.
By Heringer at 2/26/2021 11:59:00 PM