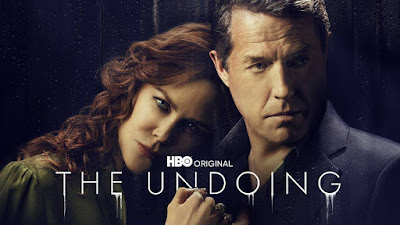 Friday night, Sharon and I finished watching The Undoing on HBOMax. The Undoing is a mystery psychological thriller miniseries based on the 2014 novel You Should Have Known by Jean Hanff Korelitz.

The six episode miniseries was written and produced by David E. Kelley and directed by Susanne Bier. It premiered on HBO on October 25, 2020. It stars Nicole Kidman, Hugh Grant and Donald Sutherland.

The series focuses on a New York therapist (Nicole Kidman), her physician husband (Hugh Grant), their young son who attends an elite private school and her wealthy father. Their life gets turned upside down after she and her family get involved with a murder case.

Sharon was critical of several of the courtroom sequences. Nevertheless, the miniseries is very well acted. It is compelling; as a murder mystery, it kept me guessing until the very end. I particularly enjoyed several of Donald Sutherland's scenes.
By Heringer at 2/05/2021 11:59:00 PM