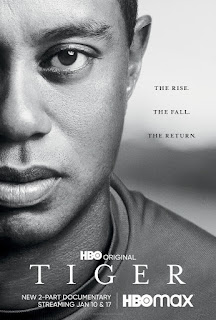 Sharon and I watched the documentary miniseries Tiger. It aired in two episodes on HBO on January 10, 2021 and January 17, 2021.

The documentary is based on the 2018 biography Tiger Woods. It examines Woods’ relationship with his father, Earl, and what impact that may have had on his development as a man, his rise, fall, and return in the world of golf. It is clear that both of Tiger's parent played a huge role in shaping his strengths and flaws.

The documentary ends with Tiger winning the 2019 Masters. It was his first major win in 11 years. Sitting in an Omaha hotel having an adult beverage and watching Tiger in the 2012 US Open, I bet Rod that Tiger would not win another major before Jack and Cooper graduated from Jesuit.

This documentary is worth searching out and watching. It includes some remarkable home movie footage of Tiger both as a teenager and an adult. I never really knew much about Earl Woods. I knew that Tiger had dabbled with the Navy Seals, but I didn't realize Earl was a green beret in Vietnam.
By Heringer at 2/10/2021 05:00:00 AM