I took a quick walk from the Sheraton to the Sundial Bridge in the morning. Afterwards, I met Tomasin at his mom's house at 7:30 am. Snipes rolled up a few minutes later. Tomasin drove the three of us to the Mt. Shasta Ski Park; it was a little over an hour.

After some initial turmoil, I had a nice day skiing with Tomasin and his neighbor Glenn. It wasn't cold or rainy. The runs were covered with a fair amount of heavy powder. Turning in this kind of snow is hard on my right knee. It was foggy most of the day.

We stopped for lunch about 1245 pm. With the visiblity getting worse and worse, we called it a day about 3 pm. 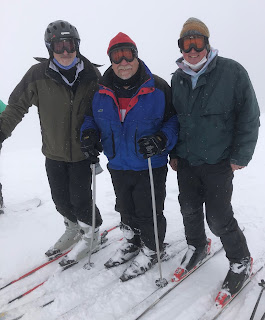 Now for the rest of the story. Snipes didn't make it into any of the pictures...

Shasta has triple lift chairs. In Snipes defense, they are moving pretty fast. I had the chair sneak up on me a couple of times over the course of the day, including getting hit on the helmet pretty hard as I turned my head to look back.

Getting on the chair for the first run, I was with Tomasin and didn’t see what happened. Snipes was with Glenn.

Talking to Snipes later, he said that as he turned to look back for the chair, he got dizzy and lost his balance. Snipes then got plowed over and knocked down by the chair. They had to stop the lift, help him get up and put him on the chair. Glenn said later that Snipes really struggled to stand up.

I was down the hill screwing around with my boots, The first time I saw Snipes he was lying on the ground wrapped around a pole. Apparently, he had skied down a short distance and slide into the pole. He was on the ground saying that he was having some trouble breathing, shortness of breathe.

They ended up putting him in a sled and taking him back to the lodge. Once he was there, they put him in an ambulance and sent him to the local hospital. Snipes spent the rest of the day having tests run on him. He joked that everything came back fine except for {redacted}.

The hospital released him about 3 pm and Tomasin and I scooped him up and headed back to Redding. Leaving Redding in separate cars, we met briefly at Louie Cario's. After checking out the restaurant, we all decided to just head home.