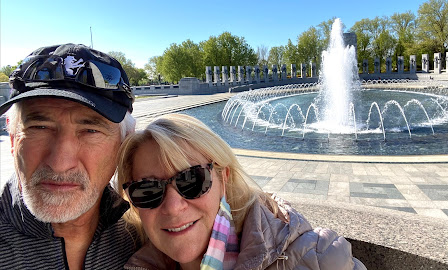 Sharon and I cooked breakfast at the hotel. One of the advantages of the AKA Whitehouse is that it is essentially a small apartment with a kitchen and living room.

The plan for the afternoon was helping Jack organize his studio apartment. While I tried to take a long nap, Sharon worked on the kitchen and framed a couple of Jack's art posters. The two of them ordered a desk, work chair, bed frame and some screens online. Jack and I put together some storage cubes from Ikea.

From there, we walked to Sophia's house in Georgetown. Sharon wanted to see her new kitten.

Sharon, Jack and I had dinner at Bar Charley. For appetizers, we split crispy brussel sprouts [olive and caper relish, almonds, parmesan] and fried oysters [creole aioli, parsley, lemon]. For entrees, Sharon had a new york strip [12oz pained hills strip, cafe de paris, gilfeather turnips, asparagus], Jack had a charley burger [wagyu beef, cheddar, truffle aioli, caramelized onion, arugula, fries], and I had marinated skirt steak [bok choy and cucumber salad, sesame, peanut]. While not the best meal that we had during the trip, I enjoyed the food and the cocktails.

After dinner, we walked back to where I had parked the car earlier in the day. We dropped Jack at Sophia's place in Georgetown and then headed back to the hotel. We crashed a little after 11 pm.
By Heringer at 4/18/2021 11:59:00 PM