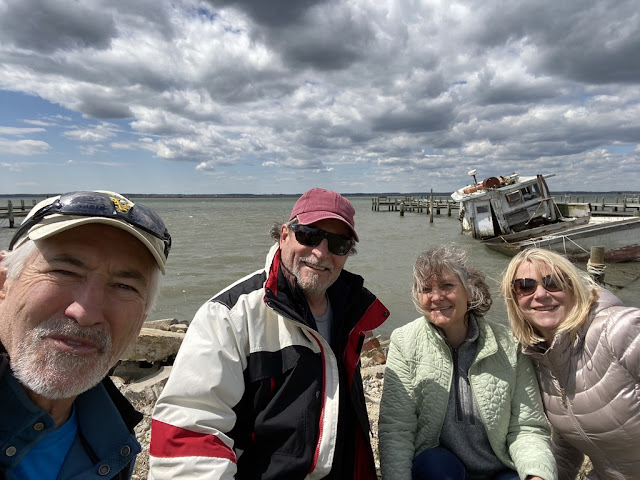 As I told Nooter earlier in the week, doing some research before the trip, Sharon became obsessed with the Chincoteague Island ponies. During the week, she booked a cruise for the four of us with Daisy's Island Cruises.

Everyone was lazy and moving slow on Friday morning. Sharon and I had talked about taking bikes back to Assateague Island, but didn't get going. After a light breakfast, the four of us walked to a Posiden’s Pantry to get some sandwiches. We packed an ice chest with the sandwiches and beer. After a quick side trip to buy some binoculars, we headed to the dock to meet the boat.

It was fairly windy. They had some challenges getting the boat fueled and everybody loaded. We ended up taking a two plus hour cruise with a nice view of the ponies at several points. There were three different mares with very young foals. The guide on the boat did a very nice job talking about the ponies and the annual events. 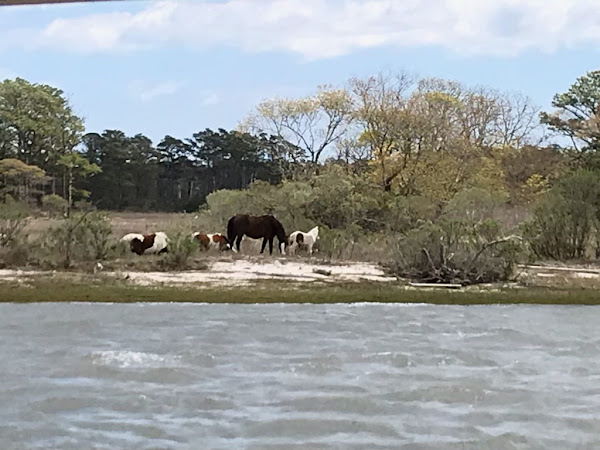 The only issue for me was the wind. I started to feel a little under the weather on Thursday; my typical travel head cold. Unfortunately, the wind and the cold took a notch out of me.

Back at the house after the cruise, Nooter took a nap. I went shopping with Sharon and Barb. I found a couple of nice Christmas ornaments to give Sharon.

I ended up taking a nap while Rob and Sharon went shopping for dinner. They stopped at a local fish market for some crab and the grocery store for some more ingredients.

Rob spent a couple of hours making a nice dinner of crab cakes, potatoes and corn. While the crab cakes were setting in the refrigator, we made nuisance facetime calls to Wallen, Tomasin and Snipes. We ended up connecting with Wallen in Puerto Vallarta and Julie with a guest appearance by Bachman.

After a very late dinner, I crashed hard. Nooter, Barb and Sharon staying up until midnight cleaning the kitchen and visiting.
By Heringer at 4/16/2021 08:59:00 PM