According to today's Sacramento Bee, the Kings have only six players under contract: Chris Webber, Brad Miller, Mike Bibby, Doug Christie, Bobby Jackson and Stojakovic. The Kings are in the process of formulating a qualifying offer for Darius Songilia that will allow them to match any offer he receives. The Kings hope to re-sign unrestricted free agent Vlade Divac, but that it is not a given.
The Sacamento Bee article went on to say that the Kings could have their sights set on guard. In the NBA draft tonight, the Kings drafted two guards: Kevin Martin and Ricky Minard.
Right after the Kings drafted Martin, ESPN was showing film of him and the analysts were comparing him physically to Doug Christie.
Here is a summary on both players from ESPN:
Kevin Martin
SHOOTING GUARD (6-7, 185) WESTRN CAROLINA
SELECTED BY SACRAMENTO, ROUND 1, PICK 26, OVERALL PICK 26 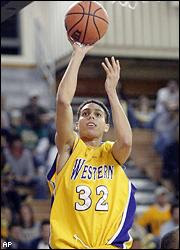 Notes: One of the best scorers in the country both his sophomore and junior seasons. Averaged 22.8 ppg as a sophomore. Ranked second nationally in scoring this season with a 24.8 ppg average.
Upside: An explosive scorer that gets it done from the perimeter and by relentlessly taking the ball to the basket. Averaged nearly 10 free throw attempts per game shooting at an 82 percent clip. Has a long wing span that allows him to defend multiple positions. A very good athlete.
Downside: His thin, rail-like body concerns some scouts. His build reminds some of Detroit's Tayshaun Prince. He takes a lot of three pointers but doesn't shoot them with much accuracy. He shot 33 percent from behind the arc last season; 31 percent the year before. His assist-to-turnover ratio is awful.

Notes: Led the Ohio Valley Conference in scoring (21.8 ppg), and was fourth in rebounding (7.3 rpg) and assists (5.1 apg). Originally declared for the 2003 NBA draft before withdrawing.
Positives: Great athleticism. Does a little bit of everything. His 5.1 assist average have some scouts wondering if he could be the second coming of Ronald Murray. Has a nice shot from midrange. Creates most of his scoring opportunities off the dribble. Good defender. Tough.
Negatives: Size is an issue. He's turnover prone. A very streaky shooter with questionable NBA three point range.
An ESPN analyst grading the draft gives the Kings a "B-". The analyst actually prefers Minard to Martin.
Posted by Heringer at 6/24/2004 09:55:00 PM