Jack played in his fourth soccer game of the season. After missing last week's game recovering from an injury, Jack played midfielder in the first period and forward in the third quarter. The Cunningham's son was on the other team.

This was the best youth soccer game I have seen in the last three years. The other team scored first and it was a see-saw battle from there. At the end of the third quarter, it was tied at 4 to 4. Both teams passed the ball and maintained their spacing extremely well.

With their strongest player at forward in the fourth quarter, Jack's team broke the game open. They scored three goals to win by a score of 7 to 4. The team has a record of 5 wins and 0 losses. 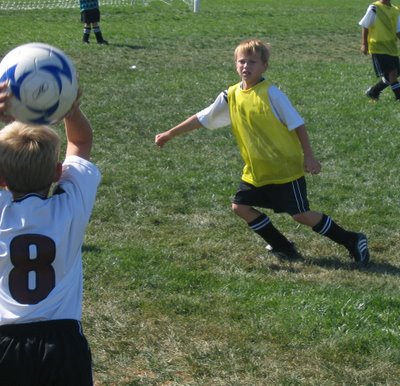