Jack played in his fifth soccer game of the season. He missed last week's game while we were gone on our anniversary trip. Jack played forward in the second quarter, fullback in the third quarter and midfielder in the fourth quarter.

His team fell behind quickly with the other team scoring in the first 30 seconds of the game. The other team scored a second goal in first quarter and they were down by a score of 0 to 2. Jack's team scored two goals in the second quarter to tie the score at 2 to 2 at halftime. Falling behind 3 to 2 in the third quarter, his team scored 3 unanswered goals to win 5 to 3. While not as cleanly played as two weeks ago, it was an exciting game to watch.

Jack had two good shots in the second quarter, but did not get his foot on ball solidly enough to score. In the third quarter, he had an odd assist. Jack was playing fullback. While his team was attacking, the ball was kicked out to midfield. He got his left foot on the ball and centered it back into the other end of the field where his teammate with the strongest foot drove it into the goal.

The team is still undefeated. Their record for the season is 7 wins and no losses. 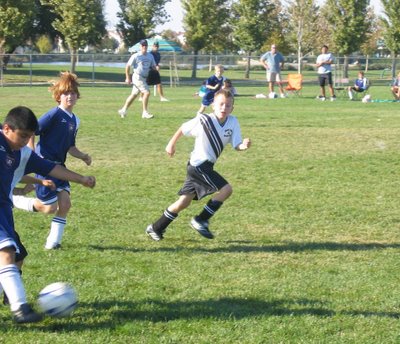