Jack played in his sixth soccer game of the season. The game was at Rancho Murietta. He played fullback in the first quarter, forward in the second period, and goalie in the fourth quarter.

With the score tied at 0 in the second quarter, Jack scored the first goal of the game. One of his teammates made a shot which bounced off a defender and Jack pushed it into the goal. He had one other good shot opportunity, but sailed it wide. Jack also had an assist on the second goal that his team scored.

In the second half, the other team was unable to move the ball across midfield. As a result, Jack and his teammate who played goalie in the third quarter never touched the ball. Jack spent the whole fourth quarter digging a hole in the ground with shoe. He was not happy that he did not get to touch the ball.

The team's record is now 8 wins and no losses. 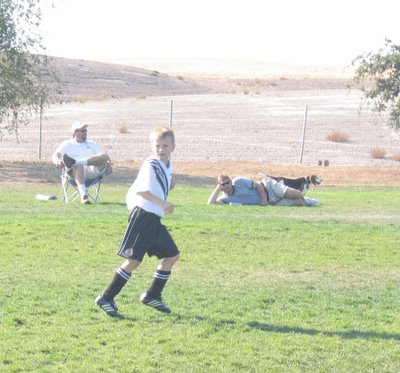