I am curious whether the economics of Christmas lots is changing.

In 2001 and 2002, we picked out trees and had them flocked at a lot on the Jackson Highway. The proprietors said that they had been in business at that location for 20 years. The lot did not appear in 2003.

We switched to the Christmas lot in the Cal Expo parking lot. This lot had more than 100 trees already flocked in a big tent. When we mentioned the other lot, the Cal Expo staff said that they had ran them out of business. We bought trees at Cal Expo in 2003, 2004 and 2005. This year the Cal Expo Christmas tree lot did not appear.

Sharon really wanted another flocked tree. After the marathon and the indoor soccer tournament on Sunday, we ended up going to a lot on Elk Grove Boulevard near old town. They only had three trees already flocked, but one of them was just about right. I picked up the tree on Monday night after work on my way home and we spent the evening decorating it. 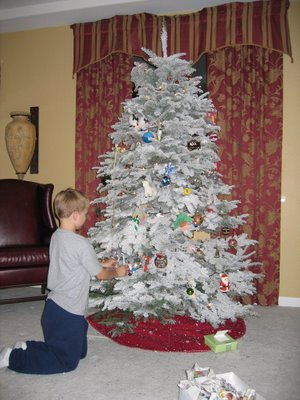