Jack and I went to the Sacramento Kings versus Washington Wizards basketball game. After leading by a score of 59 to 52 at halftime, the Kings got blown out in the third quarter and outscored 44 to 24. The Kings ended up losing the game by a score of 126 to 119. The Kings now have a record of 2 wins and 9 losses in December 2006.

It still looks to me like the Kings do not have any type of a set offense. The bright spot for the Kings was Kevin Martin; he scored 40 points on 13 for 23 from the field. This is his career high in points. Ron Artest did not play. He was a last minute scratch with a sore knee.

Like the Christmas day game in 2003, the Kings encouraged everyone to dress in white, distributed inflatable noise makers shaped like large candy canes and dumped "snow" from the rafters at half-time. 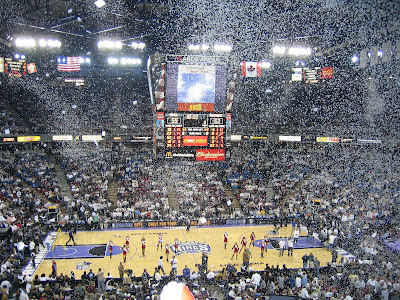 The Kings also gave away a lot stuff during the game, including a number of 40' LCD TVs, DVDs, playstation portables and at least one Playstation 3. We did not win any of the major prizes, but I did catch a Roundtable personal pan pizza that was thrown into the stands!