We held the November meeting of Jack's Cub Scout Bear Den at our house. The topic for the den meeting was astronomy and the boys completed all of the requirements for their astronomy belt loop.

We made a 27 foot by 20 foot scale model of the solar system in the driveway using string and sidewalk chalk. Brun came to the meeting and brought his telescope. He showed how to set-up, aim and focus the telescope. Everyone got a chance to look through the telescope at a couple of objects, including the Andromeda Galaxy. The boys spent some time reviewing a number of terms, including planet, star, solar system, galaxy, the Milky Way, black hole, red giant, white dwarf, comet, meteor, moon, asteroid, and universe. They finished the evening watching a 20 minute video on the solar system. 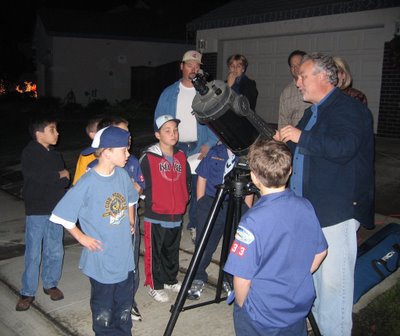