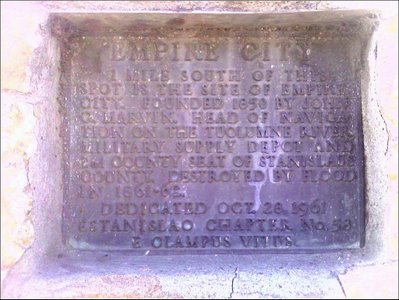 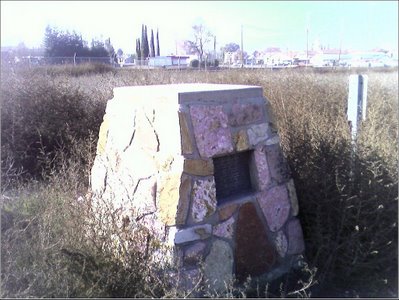 One mile south of this spot is the site of Empire City. Founded 1850 by John G. Marvin. Head of navigation on the Tuolumne River, naval supply depot and 2nd county seat of Stanislaus County. Destroyed by flood in 1861-62.

1850. John S.(?) Marvin, a lawyer from Boston, founded the town of Empire City, on the south bank of the Tuolumne River, just above Crescent City.

June 10, 1854. The first county election was held and Adamsville was selected as the county seat by thirty votes over Empire City.

May 7, 1855. The first meeting of the County Board of Supervisors was held at Empire City replacing the old County Court of Sessions. Members of the board were: D.B. Gardner, John Newsom and Robert Smith, with R. McGarvey serving as clerk.

December 20, 1855. An election was held moving the county seat from Empire City to La Grange by a vote of 558 to 139. La Grange was a mining town, having more population and wealth.

Winter 1861-1862. The rivers swelled in a horrific flood that inundated many river settlements.