Morgan, Jack, Sharon and I went to the Sacramento Kings versus Philadelphia 76ers basketball game. The Kings pulled away in the second half and won by a score of 101 to 76.

In addition to our two season tickets, we used two seats in section 122, row c. Morgan has never had a chance to see down this close to floor. While it is fun to be able to see their faces, I feel like I can follow the game better from our seats. At half time, Sharon and I ran into Randy Patane who we worked with at the Farm Credit Banks.

For the first time this season, Bibby shot better than 50% going 9 for 15 from the field. Nevertheless, I still have no idea what kind of offense scheme the Kings are trying to run; I wonder if they do.

In the last three or four games, rookie Quincy Douby has been the first substitution of the game. To me, he looks lost on the court. I do not understand why Musselman has gone away from using Ronnie Price.

Chris Weber looked very ordinary. In 26 minutes, he had 4 points on 2 for 9 from the field and 7 rebounds. His contract has one more season after this season. I have read some reports that Philadelphia is considering buying out his contract. 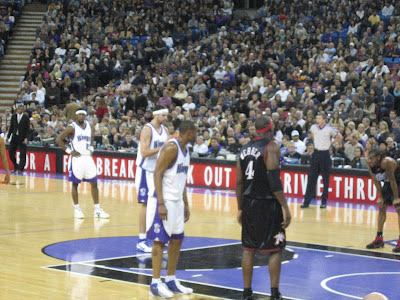 While we were sitting down low at the beginning of the first quarter, Jack caught a t-shirt that was thrown into the crowd!