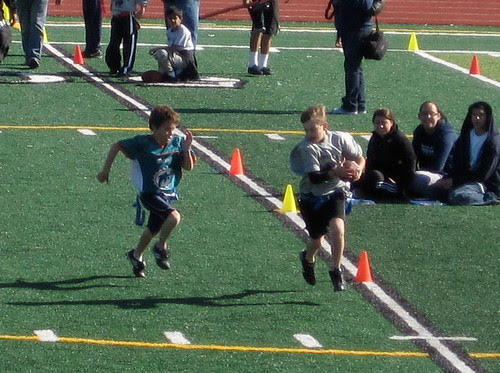 Jack played in a flag football tournament at the River City High School in West Sacramento with the Quick Silver, his CSD Flag Football team.

In the first game, the CSD Quick Silver played against the Southgate Saints, a team from South Sacramento. Jack caught two passes that he ran for touchdowns. He had one other long run. Jack played quarterback on one sequence and had two incompletions. Jack also had an incompletion on a half back option.

Jack had one of the best catches that I have seen him make all year in this game. Trying to drag his feet inbounds, he made a fingertip catch. Unfortunately, he was ruled out of bounds.

The Quick Silver lost to the Saints by the score of 20 to 12.

In the second game, the CSD Quick Silver played against the Southgate Steelers, another team from South Sacramento. Jack had three catches and one long run. He did a very nice job coming back of one of the passes to make a catch in traffic. Jack took one of the catches for a touchdown.

In the third game, the CSD Quick Silver played against the Fair Oaks Dolphins. Jack caught three touchdown passes. One of the touchdown catches was a short pass that he caught, cut all the way back across the field to the other sideline and then outran the everyone for a touchdown (see picture above). The other two touchdowns were short passes in the corner of the end zone. Jack also threw a long half back option pass over the middle to one of the younger kids who took the ball all the way to the one yard line. He played quarterback for two sequences, but was only 1 for 4.

The Quick Silver beat the Dolphins by a score of 24 to 6. Jack scored three of the touchdowns, while Wesley scored the other touchdown on pass reception and long run. Wesley also played with Jack on the Laguna Youth Baseball U10 All Star team this past summer.

The Quick Silver ended up with 1 win and 2 losses. The Saints won the pool with a 3 and 0 record and advanced to the semi-final game. The only points scored against the Saints in the pool games were the two touchdowns that Jack had in the first game. 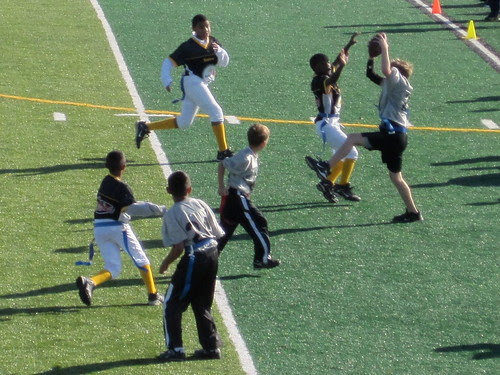