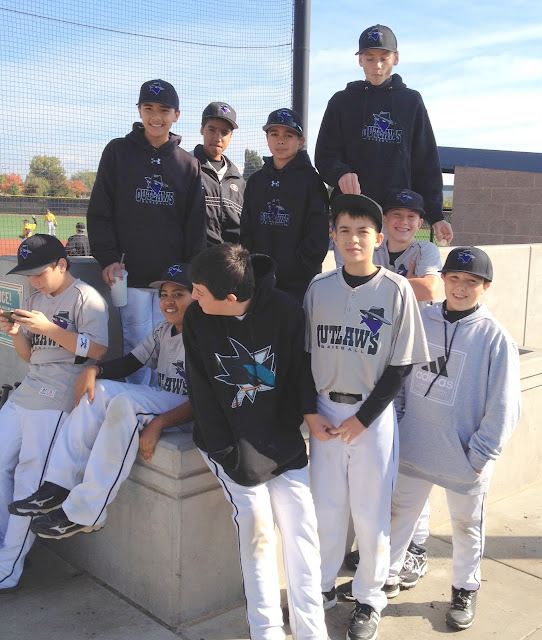 The Outlaws played their last tournament of the fall in the All Star Travel Ball Super Series Veteran's Day Salute at Mather. They played the Norcal Bears in the first game. This is a new team made up with a number of players that the Outlaws have faced before on the Golden Spikes, Bandits and Showcase teams.

At the plate, Jack was 2 for 3 with a strikeout, an RBI and two runs scored. In his first at-bat, Jack hit a 1 and 0 pitch for a hard grounder up the middle. Josh laid a sacrifice bunt down the third base line moving Jack to second. As he rounded second, he realized that no one was covering third. Jack out raced everyone to third. The first baseman tried to make a throw but threw the ball away and Jack scored the first run of the game. With Breyton on third, Jack hit a 3 and 2 pitch for a fly ball into left center for a double and an RBI in his second plate appearance. He went to third on Bailey's fielders choice and scored on an error on the shortstop on Cooper's grounder. In his third at-bat, Jack struck out on a 3 and 2 pitch to end the game. He said afterwards that he got fooled on a change up.

In the field, Jack played five innings at third base. He handled two grounders to the left side and threw the runner out at first. In the top of the first, Jeremy fielded a grounder at shortstop and threw to Jack to get the runner trying to go from second to third.

Making two errors in the first three innings and walking seven, the Outlaws misadventures continued. Trying to make it close, they lost by the score of 10 to 6 in five innings. The box score is here.

After lunch, the Outlaws played Hard 90 pastime. This is essentially the second team for Hard 90. Niko and Greysen play for the Hard 90 first side. The Outlaws beat up on this team about eighteen months ago.

At the plate, Jack was 1 for 3 with a walk, an RBI and a run scored. In his first at-bat with Cooper on third, Jack hit the first pitch into right center for single and an RBI. He stole second and went to third on Josh's ground out. Jack scored on Breyton's line drive to left. Jack hit a 0 and 1 pitch for a very hard grounder up the middle in his plate appearance. Unfortunately, the shortstop was moving to hold Jeremy at second and the ball went right to him. Jack was threw out at first. If Jeremy is not on second, it would have been a single. Jack walked on eight pitches in his third at-bat. He stole second, but ended the inning there. Jack grounded a 1 and 2 pitch to the third baseman and was thrown out at first.

In the field, Jack played seven innings in centerfield. He had one put-out and one assist. In the first batter of the game, Jack handled a routine fly ball for the out. In the top of the fifth with Hard 90 starting to get a couple of hits, Jack made one of my favorite defensive plays of the year. With one out and a runner on second, he charged a line drive into center and came up throwing. Jack threw a strike to Breyton at first base to get the runner and help kill the inning. It was a great throw!

Behind a nice pitching outing from Cooper, the Outlaws won the game by the score of 6 to 2. The box score is here.

With six of the eight teams in the tournament advancing to the elimination round, the Outlaws ended up seeded sixth and will play Clubhouse Red on Sunday morning.
at 11/12/2011 11:59:00 PM