On Thursday, September 14 while we were in New Zealand for the 2011 Rugby World Cup, we spent the morning wandering around downtown Dunedin. Tomasin, Julie and I wandered through the Dunedin Railway Station. 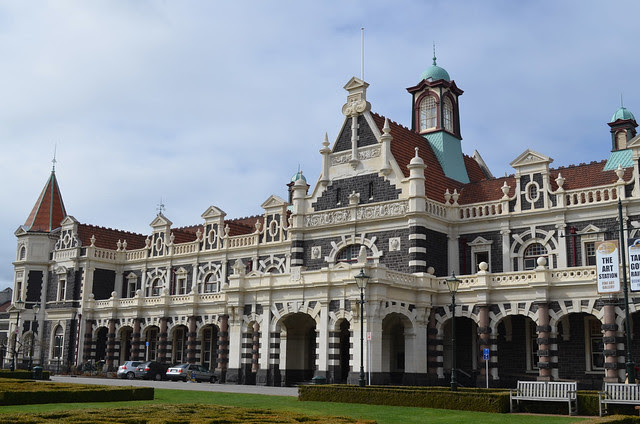 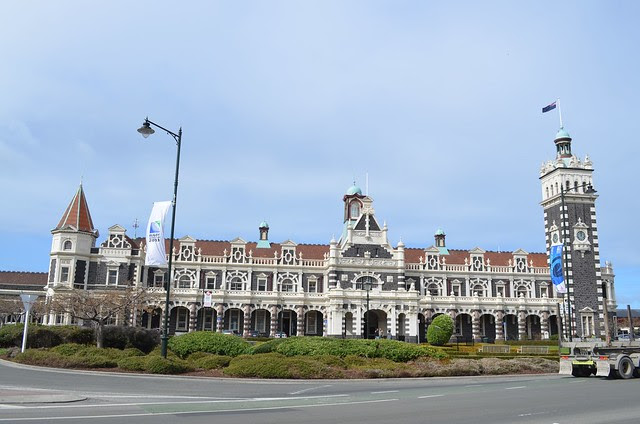 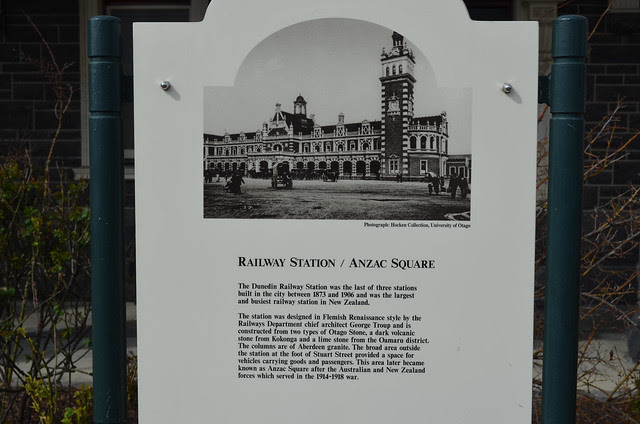 The Dunedin Railway Station was the last of three stations built in the city between 1873 and 1906 and was the largest and busiest railway station in New Zealand.

The station was designed in Flemish Renaissance style by the Railways Department chief architect George Troup and is constructed from two types of Otago Stone, a dark volcanic stone from Kokonga and a lime stone from the Oamaru District. The columns are of Aberdeen granite. The board area outside the station at the foot of Stuart Street provided a space for vehicles carrying goods and passengers. This area later became known as Anzac Square after the Australian and New Zealand forces which service in the 1914-1918 war.

The Dunedin Railway Station has been described as 'the outstanding monument of Edwardian architecture in New Zealand' and as 'well suited to dramatising the adventurous achievements of the railway in its conquest of space and time'. It was constructed during a period of growth for the New Zealand rail system that occurred between the late 1890s to the early 1900s. In 1901 Joseph Ward, the Minister of Railways, proposed spending £500,000 per annum for the next five years, a plan which included the construction of the Railways Head Office in Wellington, and a new railway station for Dunedin. Dunedin was at this time the busiest railway station in the country and was outgrowing its third building. (The first Dunedin railway station was built in 1872 near the intersection of High and Rattray Streets and had been replaced twice, each time on a different site.)

A competition was held for the design of the new Dunedin Railway Station, which was won by George Alexander Troup (1863-1941). Troup had worked for a short time with the Survey Department in Otago, transferred to the Railways Department and had become their Chief Draughtsman in 1894. His success in winning the open competition for the design of the station was important affirmation of his work as Chief Railways Draftsman. The building he designed consists of a central entrance hall flanked on both sides by long wings. It was constructed from Kokanga basalt on a base of Port Chalmers basalt, with Oamaru stone dressings. The basalt was taken from a quarry in Central Otago that had been specifically opened for construction of the station. Troup had originally designed the building in brick but stone was used to keep costs down. The stone for the pillars on the Anzac Avenue facade were imported granite from Peterhead, Scotland, and the whole station was roofed with Marseilles tiles.

As his nickname 'Gingerbread George' suggests, Troup was known for of elaborate decoration and the Edwardian Baroque of the Dunedin Railway Station did much to establish this reputation. A notable feature of the station is the domed tower located at the south-west corner of the building. Other outstanding features of the station are the foyer with its stained glass windows depicting locomotives; the frieze of Doulton cherubs and foliage that runs below the balcony; the mosaic floor (depicting a railway engine as well as other railway motifs) and the ticketboxes, set within tiled arches. Troup kept costs down by using railway labour, transport and materials, although the cost still came to £800,000.

The new railway station was sited on reclaimed land and its position had caused much controversy; the local Harbour Board in particular was concerned that it would block access to the wharves. A Royal Commission was established to determine the site and it settled for the current location along Anzac Avenue. In the event, the siting of the railway station on reclaimed land affected its construction. When building began approximately 600 piles had to be driven into the bedrock to support the weight of the structure. By the 1960s the mosaic floor in the lobby had sunk and the tiles had to be taken up; a new base was put down and new tiles relaid in an exact replica of the old floor.

The gates, which are included in the New Zealand Historic Places Trust/Pouhere Taonga registration, are part of the surrounding fence that has a concrete base with elaborate wrought iron railings. Both fence and gates were part of Troup's original design, and they run approximately 50 metres north up Anzac Avenue and almost 200 metres to the south to the site of the Otago Settlers' Museum. The platform, which at the time of its opening was the longest platform in New Zealand, is also part of the registration.

During the 1980s and early 1990s, many government departments in New Zealand underwent major restructuring and retrenchment, including New Zealand Rail. As a result, New Zealand Rail began to sell many of its buildings during this period. After much discussion the Dunedin Railway Station building was sold to the Dunedin City Council in 1991, although the Council did not formally take possession until 1994. The building then underwent a major program of refurbishment, and now houses a restaurant, the offices of the Taieri Gorge Railway, a Sports Hall of Fame, and the Cleveland Living Arts Centre. The station remains a major tourist attraction.

Sir Nickolaus Pevsner, the noted architectural critic and historian, who visited New Zealand in 1958, said that Dunedin Railway Station was his favourite New Zealand building, and commented that it was not at all provinical and the booking hall was 'very very charming indeed.' The Dunedin Railway Station is Troup's most significant building and he received a Royal Institute of British Architects Award for its design. It is a significant part of the townscape and was for many years a major hub of the South Island railway network.
at 11/26/2011 11:59:00 PM