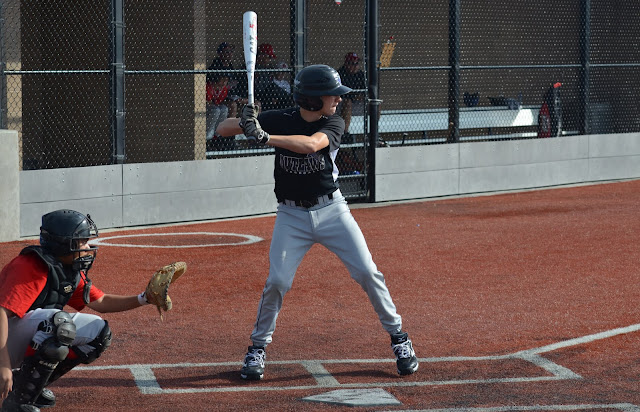 Seeded sixth after Saturday's game, the Outlaws played Clubhouse Red in the elimination round of the All Star Travel Ball Super Series Veteran's Day Salute at Mather. This team had a number of players that the Outlaws had faced before on the Dirty Dozen and South Bay Warriors.

At the bat on Sunday, Jack was 0 for 2 and hit by a pitch. In his first at-bat with two outs and runners on second and third, he ran the count to 3 and 2, fouled off a pitch and then grounded out to the shortstop. Jack struck out on a 3 and 2 count on a caught foul tip in his second plate appearance with Jeremy on second. In his third at-bat, he got hit by a pitch on a 1 and 2 count. Jack was out at second on an inning ending double play when Josh hit a grounder to the shortstop.

In the field, Jack played seven innings at third base. He had one assist on a grounder down the third base line that he handled and threw the runner out at first.

The pitching for the Outlaws was not sharp. Breyton had trouble finding the plate and the coaching staff rode Coop about 15 pitches too long. Coop ended up throwing 100 pitches between Saturday and Sunday. The Outlaws lost by the score of 7 to 4. The box score is here.

Clubhouse Red went on to beat TABU and the Chico Aces Blue to win the tournament.

This is the end of the fall baseball season. The Outlaws are talking about playing up in the spring as 14 year olds on 90 foot bases to get the boys ready for high school. They have been playing on 80 foot bases this fall.