Jack and I ran together for the first five plus miles. Our first five splits were 8:47, 8:29, 8:52, 8:53 and 8:34. I knew I was in trouble when Jack picked up the pace through the fifth mile. With about a mile to go, he started to pull away from me. I have run a lot of miles over the last month in an attempt to get my weight back down and I just didn't have anything left in my legs when Jack kicked. I covered the sixth mile in 8:32. Based on the race results, I ran the course in 54:40 for an average pace of 8:48 per mile. Jack finished the race with 53:42 for an average pace of 8:39.

Jack was very proud of the fact that he had finally beaten me for the first time in a 10k race.

It rained off and on during the race. Walking back to the car, we were wet and cold. With Sharon and Janie finishing about 20 minutes behind us, Jack and I found some place out of the rain to wait for them. Sharon had parked in a small lot near the Guy West Bridge. For some reason, it took us almost an hour just to get out of the lot! 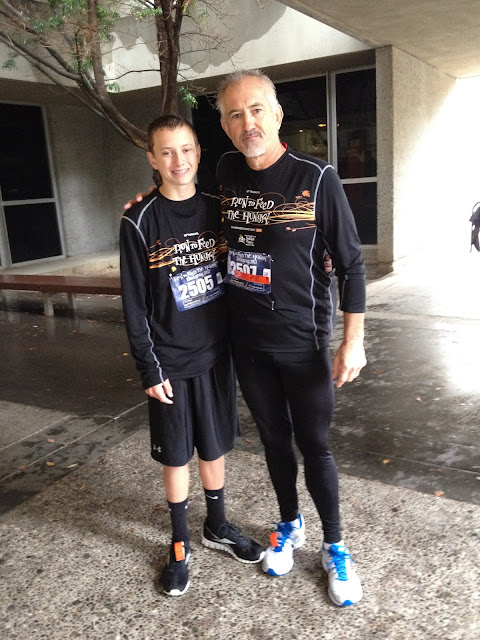