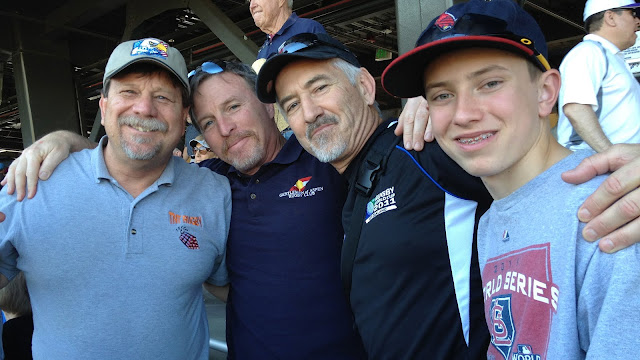 After a long day of moving, Jack and I were up early. We left a house full of boxes and headed to the airport. We caught an 8:45 a.m. flight from Sacramento to Phoenix. We were on the ground before 10:30 a.m., grabbed our rental car and were to the hotel a little after 11 a.m. We are staying this year at the Fiesta Inn in Tempe.

At the hotel, I scooped up Tomasin, David, Tomsin's mom [Pat] and Tomasin's sister [Kathy]. The group for Friday totals fourteen, including Wallen, Jill, Wallen's brother Bob, Bob's daughter Carol, Wallen's brother Jim, Marcus, Brandon and another of Marcus' friends. The plan for the day was to see the Arizona Diamondbacks play the Chicago White Sox at the ballparks at Talking Stick. This is a new ballpark built two years ago when the Diamondbacks and the Rockies moved Tucson to Phoenix. This was the first time that we have gone to this ballpark.

It is a very nice venue with a sold out crowd of 12,559. One of the things that we have noted over the last fifteen years is the crowds at spring training have increased. We can all remember going to games where the ballparks were half empty. 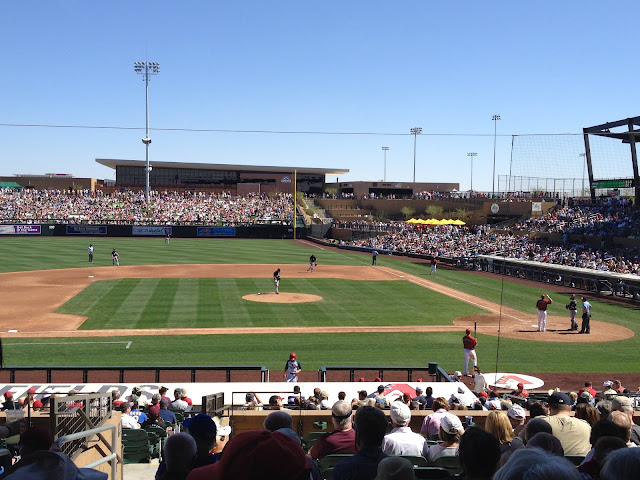 We wandered back to the hotel after the game and Jack and I checked in. Afterwards, we sat and visited near the pool. I called Bruce Barragan, the dad of one of Jack's classmates, and he joined the group for a while. Bruce and his youngest are in Arizona for a baseball tournament. Moore also eventually wandered up.

We finished the night with a group of 12 for dinner at Buca di Beppo in Scottsdale. Wallen, Moore and I got into an extended discussion about healthcare.