We took Jack to the Jesuit High School registration and placement testing for the Class of 2016. After short presentations about the sports, arts and club programs, Jack took placement tests in english, science and math. The tests help determine at which level he will be placed in the fall. Afterwards, he said that he felt like he did very well on all of the tests, particularly the algebra test.

Watching the 200 plus boys line up for the testing, I expected to see a couple of man-childs. I was surprised when I didn't. I was struck by how small and young a lot of the boys look.

The plan for the rest of the day was to try and get to Sparks for a 2:45 p.m. baseball game with the Outlaws. This plan went quickly awry. We were just a little behind the storm instead of ahead of it. We ended up sitting at Dutch Flat for over an hour to get through the chain control. Once we got through the chain control, the going was slow; it was snowing heavily. We sat again for over an hour at Donner Summit with the snow piling up on the road.

It took us almost six hours to get from Carmichael to the Grand Sierra Hotel in Reno. The only good news was that the car performed very well in the snow. The Lexus RX400h is a four wheel drive with an electric motor in the back. Even with street tires, it handled the snow extremely well. 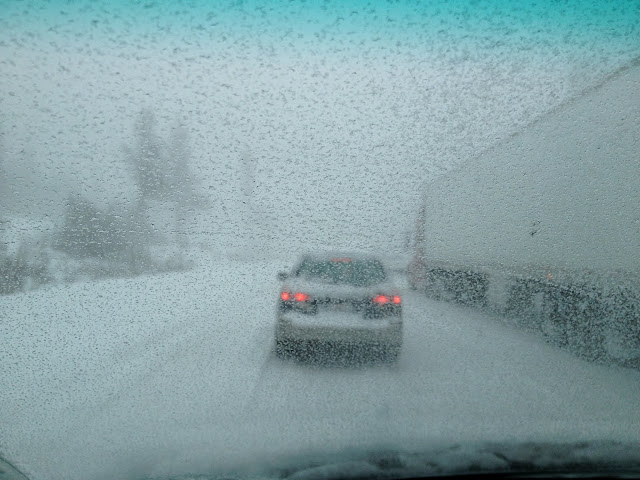