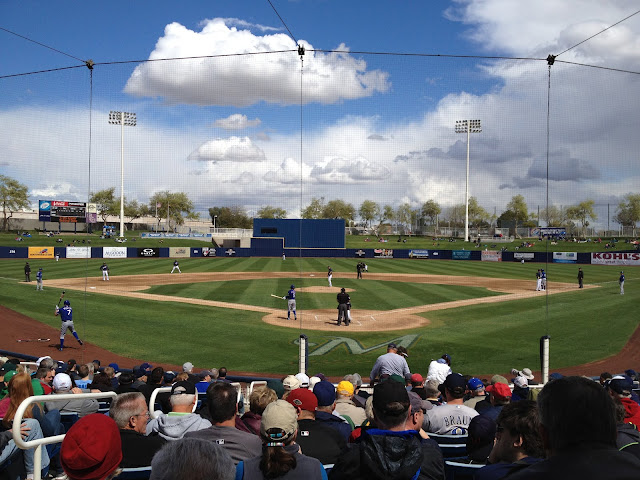 As Bob Wallen noted, "this was not a typical spring training day."

We had been talking all weekend about a storm front that was moving towards Arizona. It rained hard on Saturday night. I was certain that the storm was going to move through quickly and leave us with a nice Sunday...

I got up fairly early. Leaving Jack in the room, I ran for an hour on the treadmill. Afterwards, Tomasin, David, Gail, Jack and I had breakfast at the hotel.

After a couple of calls to the box office to check on the status of the game, we eventually rallied everyone and headed to the game. We had tickets to see the Brewers play the Rangers at Maryvale. Maryvale has always been one of my favorite venues.

Over the first four innings, we saw a couple of home runs and a suicide squeeze. With the Brewers leading by the score of 6 to 4 in the fourth inning, it started to rain hard and then hail. Everyone headed for the exits and the umpires called the game. It is the first time that I have been rained out of a spring training game. The temperature dropped markedly. When we got back to the car, the temperature gauge said that the outside temperature was 39 degrees.

Wallen, Jill, Tomasin, Jack and I eventually had dinner in downtown Tempe at Z'Tejas. With a number of people booked on very early morning flights, we had an early night. Jack and I finished the night watching the Fast and Furious on TBS...
By Heringer at 3/18/2012 11:59:00 PM