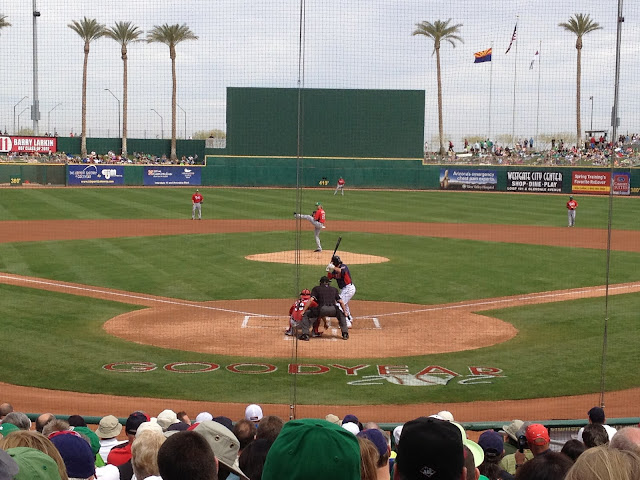 The Wallen's had invited us to go with them to Hayden Peak. With Jack still sound I asleep, I ended up running on the treadmill for 45 minutes instead.

Afterwards, we got cleaned up and headed to Harlows. Jenny found this spot in 2004 and we have been returning annually for at least one breakfast.

The plan for the day was to head to Goodyear and see the Indians play the Reds. Goodyear is about 25 miles west of Tempe. We saw a game at this ballpark the first year it opened in 2009.

We had some very nice seats behind home plate. Unlike Friday, the ballpark was only about 2/3's full with an announced crowd of 6,500. Moore, Bob, Luke and Brea joined the group, while Kathy and Pat took the day off.

The Red beat up on the Indians and won the game by the score of 9 to 2. The Reds scored in each of the first five innings. Ubaldo Jimenez started for the Indians and got hit hard; he gave up a lead-off home run to start the game. Bronson Arroyo [shown with the high leg kick in the picture above] started for the Reds; he pitched four innings and gave up four hits and one earned run.

We headed to Luke and Brea's house in Laveen after the game. After a quick stop there, Tomasin, David, Jack and I headed to the airport to pick up Gail Bachman. She is flying to Starkville with David and then traveling back cross country with him in a u-haul.

Tomasin's mom had made dinner reservations at the Stockyards. After a leisurely dinner, Tomasin, David, Gail and I played pool at Draw 10. I have known David and Gail since they were born. I have watched them grow up for the last 25 years. It was a very surreal experience to hang out and play pool with them. I headed back to the room reasonably early and crashed watching the end of ConAir with Jack.
By Heringer at 3/17/2012 11:59:00 PM