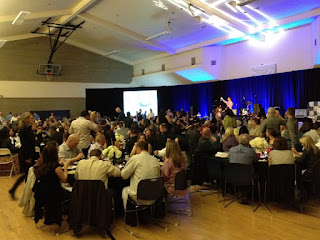 It is probably the last year that we will attend the event. With Jack moving on to high school in the fall and the move to Carmichael looming, our ties to the parish are fraying. I will miss SEAS and Good Shepherd. It has come to feel like a small town over the last ten years.

Two long tables were set-up for the eighth grade parents. We sat across from the Romeros and near the Laskins; both of their boys will be going to Jesuit with Jack next year.

The event finished with a Johnny Cash tribute band. The singer sounded surprisingly like Johnny Cash!
By Heringer at 3/10/2012 11:59:00 PM