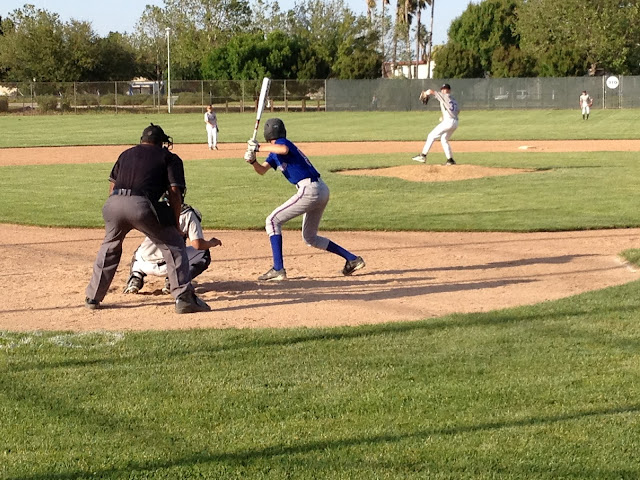 Jack is definitely starting to hit the ball better. At the plate, he was 0 for 1 with a walk, two sacrifice flies and two RBIs. In his first at-bat in the bottom of the first with one out and runners on second and third, Jack drove a 0 and 1 pitch hard into centerfield for a sacrifice fly. The center fielder caught the ball and Aaron tagged up at third and scored for the RBI. Jack struck out looking on a inside 3 and 2 pitch in his second plate appearance. He walked on four pitches in his third at-bat. Jack went to second on a balk and third on a passed ball, but ended the inning there. In his fourth plate appearance, Jack lined a 2 and 1 pitch into centerfield for a sacrifice fly and an RBI. Aaron tagged up and scored from third.

In the field, Jack played five innings at first base and one inning at third base. He had 6 put-outs and 3 assists. Jack handled throws second baseman, shortstop and third baseman for 6 put-outs at first. He handled two grounders at third and threw the runner out at first for the out. In the first inning while at first, Jack handled a grounder to the right side and threw to second to force the lead runner.

Trailing 10 to 5 with time running out in the bottom of the sixth, the Outlaws rallied to score six runs and win the game by the score of 11 to 10. The box score is here.

The Outlaws turned right around and played the Walnut Creek Bulldogs 14u team in the second game.

At the plate, Jack was 1 for 3. In his first at-bat, he ran the count to 3 and 2, fouled off a pitch and struck out looking on an outside pitch. Jack smoked a 0 and 1 pitch up the middle in his second plate appearance. When he hit it, I was sure it was a hit. The shortstop made a nice play and threw him out at first. Jack hit a 0 and 2 pitch for a soft line drive into right field for a hit in his third at-bat.

In the field, Jack played two innings at third, one inning in centerfield and pitched three innings. He had one assist. At pitcher, Jack fielded a grounder and threw the runner out at first. In three innings at pitcher, he threw 46 pitches: 23 balls and 23 strikes. This is his longest outing since last October. Jack gave up two earned runs on two walks and two hits in the sixth inning and was essentially the losing pitcher. The grass field at Mather has an enormous foul ground. There was a pop-up near third base that was not caught and could have changed Jack's sixth inning substantially.

With no outs in the top of the seventh, Aaron walked and Trevor singled. Jack hit a soft line drive into right. The right fielder was not very mobile and when it left the bat I was sure from behind home plate that it was a single. Massive confusion ensued about whether or not the outfielder caught the ball; he hadn't. Trevor ended up going back to first and getting forced out at second. Aaron was out in a rundown behind second and third. Jack was safe at first. Jack said that I should have scored it has a fielder's choice; I didn't. The Outlaws lost the game by the score of 3 to 1. The box score is here.

The Outlaws ended the day seeded fourth out of five teams. They will play the Patriots 14u team on Sunday morning at 8 a.m. The Patriots team is a feeder team for Consumes Oaks high school in Elk Grove.
Posted by Heringer at 5/05/2012 11:59:00 PM