Drew and Morgan's maternal grandfather passed away on Tuesday. Drew's tribute to him is here.

Bill was a unique soul. As I have said before, one of the things that I lost in my divorce was the great relationships that had been built with Bill, Janie and Jamie. All of them were an important part of my life for almost 10 years. 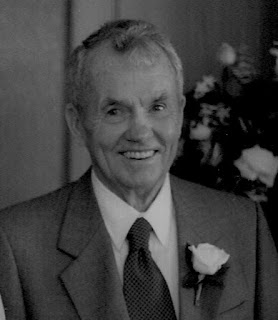 William Frank McFarlane of Clovis passed away in his boyhood home on Tuesday, May 15, 2012, after many years of battle with Parkinson's disease. He was born in Fresno, California, on January 1, 1926, to Dallas Fleming McFarlane and James Frank McFarlane and grew up on their southeast Clovis farm, attending Jefferson Elementary School and Clovis Union High School. From Fresno State College Bill transferred to the University of Southern California, earning Bachelor of Science degrees in both Naval Science and Business Administration. In 1948 he and his parents formed a farming partnership, McFarlane and McFarlane, growing Muscat grapes for raisins and wine. Through the years crop plans evolved to include cotton, grain, plums, vegetable and flower seeds, almonds, citrus and rice. He and Anne Cochrane married in 1948, parenting four daughters and a son. Bill and his father were committed to quality education and community involvement. Bill was a member of the Jefferson Union Elementary governing board and a charter member of the Clovis Unified School District board. He was a founding member of the board of directors of the Foundation for Clovis Schools, and a member of the Reagan Educational Center Agriculture Department Advisory Committee. Bill was proud when Clovis Unified School District honored him by the naming of the McFarlane-Coffman Agricultural Center. Bill's leadership in the farmer cooperative arena is legend, beginning in 1951 when he joined Sun-Maid Raisin Growers Advisory Council. He was president of Clovis-Sanger Cooperative Gin from its inception in 1954 until 1978; joined the board of Calcot, Ltd. in 1955 and was chairman of that organization from 1966 to 1974; served as president of California Cotton Growers Association; and was a member of the Producers Steering Committee of the National Cotton Council, He was a director of the Western Cotton Growers Association for 24 years. After almonds replaced cotton in the eastside landscape, he was for 30 years founding president of Central California Almond Growers Association and served on the board of Blue Diamond Growers for 17 years, 4 years as chairman. A principal of the family-farming group Cinco Farms, Bill served as president of California Westside Farmers for eight years and chairman of Farm-Water Alliance for six years, which effort culminated in the signing into law of the federal Reclamation Reform Act of 1982. He was a member of the board of Westlands Water District, and served on the board of the Federal Crop Insurance Corporation of the US Department of Agriculture during the eight years of the Reagan Administration. In 1967 he became a director of the National Council of Farmer Cooperatives, as well as the Agricultural Council of California, served as chairman of the Ag Council, and was awarded their Co-Op Farmer of the Year Award in 1994. In 2002 he married Dorcas Hardison Thille, an active member of the cooperative farming community. Bill received the 1994 Agriculturalist of the Year Award at the California State Fair, and in 2000 the Greater Fresno Area Chamber of Commerce Agriculturist of the Year Award. Having served for 14 years on the board of the CSUF Agricultural Foundation, Bill's final expression of his love for agriculture was his commitment to Friends of Agricultural Extension, reflecting his belief in the public value of University agricultural research. He is survived by his wife Dorcas; his four daughters, Susan Harper and her husband Chip of Paris, Texas, Sayre Miller and her husband Byron of Sanger, Jane Gamble of Pacific Grove and Alison McFarlane of Carmel Valley; his son, James McFarlane and his wife Darla of Clovis; 14 grandchildren; and 13 great-grandchildren. A Funeral Service will be held at Memorial United Methodist Church, 1726 Pollasky Avenue at Scott Avenue in Clovis, on Friday, May 25, 2012, at 10:30 a.m. In lieu of flowers, remembrances may be sent to McFarlane-Coffman Agricultural Center c/o Timberwolves Foundation 2940 Leonard Ave., Clovis, CA 93619, Clovis Community Medical Center, 2755 Herndon Avenue, Clovis, Ca. 93611; or Clovis-Big Dry Creek Historical Society, 401 Pollasky Avenue, Clovis, Ca. 93612.
By Heringer at 5/19/2012 07:57:00 AM