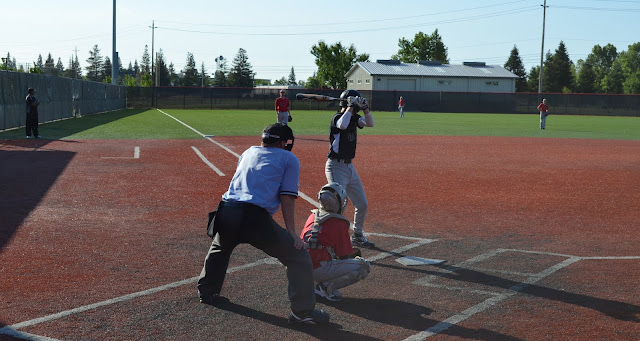 The Outlaws played in the second day of the Northern California Travel Ball Ultimate Memorial Day tournament. For the second straight day, they had afternoon games; a rare luxury. The Outlaws played Hard 90 in the first game of the day. This is a team that they have faced a number of times over the last four years without much success. Hard 90's roster has turned over a lot in the last year; they have a number of new players.

At the plate, Jack was 2 for 2 with a walk, a double and three runs scored. In his first at-bat, Jack walked on four pitches. He stole second and scored on Breyton's triple to right. Jack crushed the first pitch to centerfield in his second plate appearance. It went over the centerfielder's head for a double. Scott noted afterwards that Jack still did not have his hands fully extended. He went to third on Breyton's single and scored on an error by the second baseman. In his third at-bat, Jack lined the first pitch into left field for a single. He scored on Breyton's triple to right center.

In the field, Jack played third base for seven innings. He had four assists, two put-outs and two errors. Jack had tagged out a runner trying to steal on a throw from Jordan in the first inning. In the fifth inning, a runner tried to advance from second to third on a line drive to left. The ball went 7-3-5 and Jack tagged the runner out at third. He handled four grounders to the left side and threw the runners out at first. Jack had misadventures with two other balls. He had an error on a hard hit bouncer to his left that took a big hop. Additionally, on a tailor made double play ball, Jack threw the ball in the dirt to Trevor at second.

The Outlaws jumped all over Hard 90s starting pitcher. In the first two plus innings, they scored seven runs. Jack and Breyton eventually ended up with three runs scored each. The Outlaws won by the score of 10 to 5. The box score is here.

The Outlaws turned around and played the Dirty Dozen in the second game of the day. This is a team that they have faced a lot in the last couple of years with good success. There is no love loss between the two teams.

At the plate, Jack was 0 for 2 with a walk and a run scored. In his first at-bat, Jack walked on five pitches. He stole second and went all the way home on a wild pitch. Jack struck out on three pitches in his second plate appearance. In his third at-bat, Jack grounded a 1 and 0 pitch to the left side and was thrown out at first by a step.

In the field, Jack played an inning at third, an inning at first and three innings in centerfield. He had three put-outs. In the second inning, Jack took throws from the pitcher and third baseman for the out at first. In the fourth inning, he made a "routine" catch on a line drive hit to center.

The Dirty Dozen's starting pitcher (Craig Carroll) was huge: 5' 10'' and at least 200 pounds. Fortunately, he had control problems. The Outlaws scored four runs on an error, four walks and a bushel of wild pitches. The Outlaws added 7 more runs in the second inning against a second pitcher (Matthew Freeman). The Outlaws won the game by the score of 11 to 3. The box score is here.