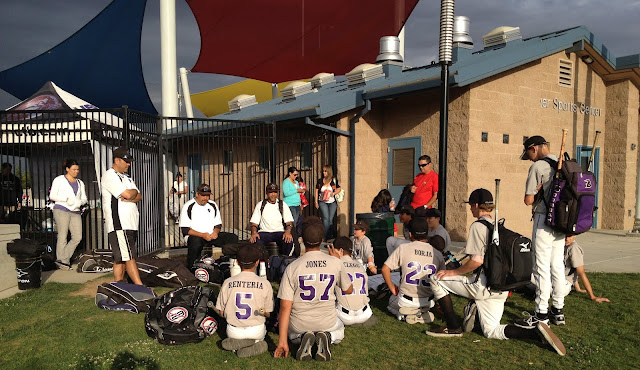 The Outlaws will be spending the long weekend playing in the Northern California Travel Ball Ultimate Memorial Day tournament. I am thankful that they got later games on both Saturday and Sunday. They played the San Jose Spartans in the only game on Saturday at 5:00 p.m.

After a solid tournament last weekend, Jack struggled at the plate. He was not happy. Jack was 0 for 3 with a sacrifice fly and two RBIs. In his first at-bat against a hard throwing left hander, Jack struck out on a 2 and 2 pitch. With Cooper on third and Trevor on second with one out, Jack fell behind 1 and 2 in the count in his second plate appearance. He fouled off two pitches and then hit a sacrifice fly to right to score Cooper and advance Trevor to third. Although he was not pleased, it was actually a very good at-bat. With Trevor at third and one out, Jack grounded a 2 and 1 pitch to the shortstop in his third plate appearance. He was out at first and Trevor scored for the RBI. In his fourth at-bat, Jack hammered the first pitch deep into left center for an out. He just got under the pitch. One of these days, Jack is going to get all of one of these and crush it.

In the field, Jack played one inning at third, two innings at shortstop and one inning in centerfield. He had two put-outs and one assist. In the bottom of the second, the lead-off batter hit a single. Trying to steal second, Jack took the throw from J.J. and tagged the runner out. With two outs in the same inning, a ground was hit right at Jack at shortstop. He had trouble finding the handle, but then throw a strike to Breyton at first for the out. In the third inning, Jack ranged way behind second base to catch a soft fly ball for the out.

Trailing 5 to 3 in the top of the fourth, the Spartans changed pitchers. The Outlaws hammered the new pitcher for 6 runs in the fourth and 5 runs in the fifth. They won the game by the score of 14 to 5. The box score is here.