Back at Riverfront Park in Martinez, the Outlaws played the LBA Bucks in the first game of the day. Unfortunately, this was one of those games where things start to go wrong and the team can never seem to get back on top. The problems started with the mound. After Josh pitched part of the first inning, it was determined that the mound was about foot back from where it should have been. The game was halted for 10 minutes while they reset the mound. Even afterwards, the footing caused problems all day. There was a hole and an embedded footing in front of the mound that all of the pitchers struggled with the rest of the day. The Outlaws would spend all day on the field...

At the plate, Jack was 2 for 3. In his first at-bat with two outs in the bottom of the first, he drove a 1 and 2 pitch into left field for a single. Jack stole second and went to third on an error by the pitcher. He did not make it home when Josh was thrown out on a soft line drive into right field. Rarely do I get down on another kid, but Josh let up for the last three steps and that made the difference between a single and a RBI and an out. Jack struck out swinging on a 1 and 2 pitch in his third plate appearance. With one out in the bottom of the sixth and Coop on first, Jack hit a 3 an 2 pitch for a soft pop-up down the first base line for a single. He advanced to second when Josh's ground ball was kicked by the third baseman. Jack was forced out at third on Bailey's fielder's choice.

In the field, Jack played four innings at third, one inning at shortstop and pitched the sixth. He had two put-outs and one assist. Jack came into pitch with the bases loaded and no outs in the top of the seventh. It is probably the best that I have seen him pitch. Jack threw 17 pitches: 12 strikes and 5 balls. He struck out two looking and got one on a soft fly ball to shortstop. Jack had his knuckleball working.

With the horrible start [4 runs in the top of the first] plus six walks and eight errors, the Outlaws lost to the Bucks by the score of 8 to 1. The box score is here.

The Outlaws turned right around and played the Stealth. Although most of the players were different, this is a team that they have seen before.

At the plate, Jack was 1 for 2 with two walks, two RBIs and two runs scored. In his first at-bat, Jack grounded the first pitch to the second baseman and was thrown out at first. Jack walked on five pitches in his second plate appearance to load the bases. He ended the inning there when Josh struck out. In his third at-bat, Jack grounded a 1 and 2 pitch through the right side to score Cooper and Bailey. He stole second, went to third on an error by the shortstop and scored on Chance's line drive to right. Jack walked on four pitches in his four plate appearance. He went to third on Josh's fly ball single to center and scored the last run of the game on an error by the pitcher on Chance's infield grounder.

After looking sharp pitching the last inning of the first game, Jack struggled with his control in the second game. The five innings that he pitched combined between the two games are the most innings that he has ever pitched and the most pitches that he has ever thrown. In four innings in the second game, Jack threw 72 pitches: 37 balls and 35 strikes. He walked four batters, hit two, struck out two and gave up two earned runs in the first inning. With some help from the defense, he labored through the second, third and fourth innings without giving up a run.

Putting up runs in four of the six innings, the Outlaws won the game by the score of 10 to 2. The box score is here. While the Outlaws have had their share of drama off the field, the Stealth team was clearly melting down. One of the parents pulled their kid out of the game and left.

By winning the game and holding Stealth to less than four runs, the Outlaws were seeded fourth out of nine teams and qualified for the consolation game. The Outlaws turned right around and played the Martinez Bulldogs. This is also a team that they have played before, but with only two or three of the same players. I am not sure if it is just the fact that the Outlaws have been playing 14Us the last two tournaments, but the other team looked very young.

At the plate, Jack was 1 for 5 with a run scored and a RBI. In his first at-bat, he lined a 2 and 2 pitch into right field for a single and a RBI. Jack struck out on a 2 and 2 pitch in his second plate appearance. It was a horrible call by the home plate umpire on a checked swing. I asked the first base umpire between innings if it was a swing and he said no. In third plate appearance, Jack grounded a 3 and 2 pitch to the shortstop for the out. He struck out swinging on a 2 and 2 pitch in his fourth plate appearance. With the Bulldogs out of pitching in the top of the seventh, Jack crushed an 0 and 1 pitch to deep centerfield in his last at-bat. The fence is marked as 355 feet. The ball went somewhere between 310 and 320 feet. With the outfield playing very deep, the centerfielder made a nice catch for the out. Jack was pissed; I honestly think that he thought he could hit it out of the park.

In the field, Jack played seven innings at third base. I love watching Jack play third base. During the course of the day, he made at least three plays that I don't believe anyone else on the team could have made. Jack had two put-outs and three assists. The put-outs were both on pop-ups to the left side, while the assists were on grounders with throws to first to get the runner.

With the Outlaws leading 4 to 2 in the top of the seventh, the Bulldogs ran out of pitching. The Outlaws five through nine hitters all scored to blow the game open. The Outlaws won the game by the score of 9 to 2 to claim third place in the tournament. The box score is here. 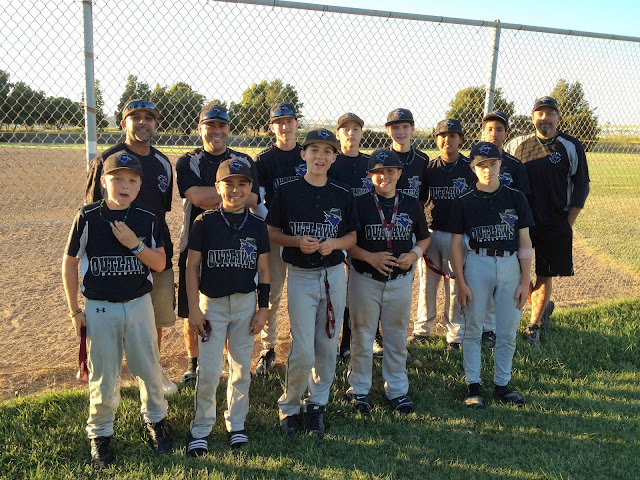